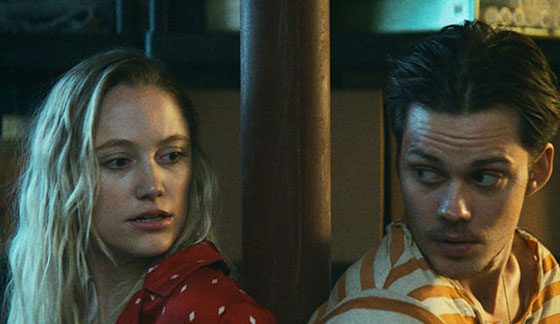 A pair of thieves with dreams of living it up in Florida make a couple of big mistakes during a gas station holdup sending them down a wildly different road in Dan Berk and Robert Olsen’s Villains. First, they swear this is their “last job!”—always a no no where movie characters are concerned—and second, they forget to,  you know,  pump their escape car with any of the station’s gas. Thus they find themselves stalled out on the road and scouring the nearest secluded home for anything to help them in their journey. The home they find just so happens to have a small girl shackled in the basement. Suddenly the mission isn’t just for gas for the car but an all out battle with the unsuspecting homeowners. As I said, it’s a much different path than Florida.

Villains grabs you quickly and easily thanks to the charisma of its two leads, Jules and Mickey (Maika Monroe and Bill Skarsgård, respectively). They’re goofy as all get out—we’re introduced to them fumbling through their robbery in rubber animal masks—but it’s so obvious they’re head over heels in love with each other that you just want to root for them. Of course Monroe (It Follows) and Skarsgard (It & It Chapter Two) are no strangers to the suspenseful or violent elements Villains throws at them eventually, but as these two crazy kids they both show off a genuine knack for comedy. I can’t imagine a better time to see Villains than if you’re in need for some comedic relief after a dose of Pennywise.

Now let’s get back to that girl chained up in the basement. Turns out she belongs to the equally tight couple of Gloria and George (Kyra Sedgwick and Jeffrey Donovan), the homeowners who combat Jules and Mickey’s manic energy with nothing but civil hospitality. The thieves are ready to fight their way out of the house with the chained little girl, but George and Gloria disarm them long enough to chat about what’s going on. Donovan in particular revels in George’s southern salesman draaaaaaaaawl to calm everyone down. The unlikely clash of these couples is strongly supported by candy colored production design and a nifty musical score that keeps the proceedings tonally in sync until very near the end of the film. The resolution of the wildcard chained child isn’t quite as much fun as how we got there, but with a runtime just shy of 90 minutes, it’s hardly an issue.

The fun of this Villains is all down to the perfect casting. The couples are equally unhinged but operating by their own internal logic while being totally devoted to their partners. Mickey and Jules are like excitable puppies in their eagerness to please each other while George keeps up a veneer of civility even though it’s clear that Gloria is way out of touch with reality. Sedgwick too puts in a delightfully bonkers turn as Gloria that includes a striptease for Mickey. Everyone is chewing so much scenery it’s a wonder anyone has room for Gloria’s shepherd’s pie.