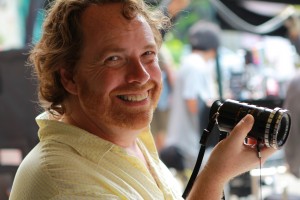 Christopher Bessette is the writer and director of the film “Trade of Innocents”. The film recently played in the Toronto Cornerstone International Film Festival and we were awarded “Best Feature”. The film was released limited in theaters early this Fall and will be released on DVD on December 11, 2012. Media Mikes had a chance to chat with Christopher about the film, what people can do to help in real life about human trafficking and also what he had plans next.

Mike Gencarelli: You have not has a simple career as filmmaker ranging from places like Amazon and the jungles of Central America, Russia, South East Asia, throughout Europe, across Canada and most of the United States; what do you enjoy most about working in so many different situations?
Christopher Bessette: I am really grateful for the places my career has taken me. You learn to be sensitive to cultural differences and become the observer in the nuance of communication… primarily because you don’t speak the language, so you learn to watch their physical mannerism and reactions.  This has been invaluable for me as a director.

MG: Tell us about how you were inspired to write and direct “Trade of Innocents”?
CB: Interesting how coffee shop conversations can ultimately lead you to the other side of the world. In 2008 I was in a coffee shop with a friend and she shared with me her missions work with orphans in Cambodia.  She told me about the plight of the people and the intense suffering they’ve endured.  My heart was broken and I immediately thought of two of my characters that are in Trade of Innocents. Two months later I get a surprise phone call from a broadcaster that I had worked with 17 years earlier and they asked me to help them tell a story about an organization that rescues children from the sex trade in CAMBODIA! I already had a story that I wanted to tell, so the trip would be dual purpose, I’d do the work for the broadcaster and I’d location scout and research for my movie.  So now I’m in country and I am seeing things happen all around me.  When your readers see the movie and the “Puppy Love” scene in the bar of the hotel; that really happened.  I chased down a perpetrator, following an investigators lead, exactly like the scene in the movie.  People might say, “come on” but if they could feel an ounce of pain my soul suffered when the pedophile was getting away with the little girl, they’d understand why I wept when we recreated that scene for Trade of Innocents… even as gut wrenching as that was, still it wasn’t the impetus.  On that same trip I found myself in the village of Svay Pok, 11 KM outside of Phnom Penh in a building called Rahab’s House. If you’ve seen the Dateline report, this is the building that was a notorious brothel. It is now used used as a community center, day care, medical clinic, church etc.  I went upstairs to the second floor, the room was sterilized freshly painted and void of furniture. Rahab’s House administrator told me that the room upstairs, “The Virgin Room or the Pink Room” was the room brothel owners held children as young as 5, 6 years old for the pedophiles.  I looked out of the bared window of that room to the dirt streets below and saw children playing. I wondered if a little girl looked through this same window wondering why she couldn’t be out there with her friends. I found myself whispering the words, “Oh God, help me tell her story, I have to do something, help me tell her story.”  Needless to say I came home with the story burning in my heart.

MG: How was it working with such an amazing cast like Dermot Mulroney, Mira Sorvino, John Billingsley and Trieu Tran
CB: Absolutely brilliant. Each actor has a different approach. My job is to serve each one so we communicate effectively and in-turn they serve the story, and the story serves the audience.  Here’s where the multi-culture experience comes in handy, I watch their unspoken communication actions and reactions and that gives me clues on how to effectively communicate with each of them.  Trieu Tran and I were in-sync from the beginning, I would say “a couple of words” to Trieu and he’d be like, “gotcha” and boom it would be outta the park!  All of these people are incredible professionals and my level of work with them is very subtle, whereas with other actors in the same piece, it is a lot more intense.  The end result is you’re looking for balance.

MG: Where you aware of Mira’s position on the topic of human trafficking before casting?
CB: She was a goldmine find.  I wasn’t personally aware of it but when her name came to the table, everybody on the producing team started buzzing about her passion with the  issue.  To have an actress that is extremely skilled and passionate about the issue is such a huge blessing.

MG: How does “Trade of Innocents” compare from your previous films?
CB: It is ambitious,  it carries poetic imagery of subtext, that for the viewer looking for it, will find.  I won’t spoil all of it by telling you, but the theme of redemption runs throughout… in each of the characters, even in colors.  The color red for example is typically associated with the red light district or a lady of the night, but in our film you’ll find it played in all of the positive ways, the red krama (scarf) the red drapes in Princess Willow Leafs palace, the Crimson Sun Bird that leads Amy into shanty town etc.

MG: Do you think that this film will create awareness for this “epidemic” of a situation?
CB: One film won’t be the answer, people will. The film will entertain but I hope that somewhere along the journey the viewers realize, “This is really going on!”  There is a collective voice that is silent for the most part crying  – that little girl looking through the bars of a window, hoping that a modern day abolitionist will stand up and say, “Enough, this is wrong.”  I hope it stirs those people that will make a difference.

MG: What do you have planned to follow-up this film?
CB: From real life drama / thriller in “Trade of Innocents” to real life drama in a supernatural thriller: imagine if I told you “The 6th Sense” was real.  True Story –  A 12 year old boy wakes from a coma and he is unable to speak but he can write.  He writes two letters, to two families, street addresses it to their house and everything… but he’s never met them before.  The contents of the letters contain exact details and names of their deceased children he’s met on the ‘other side.‘ They have a message for their parents and the world.