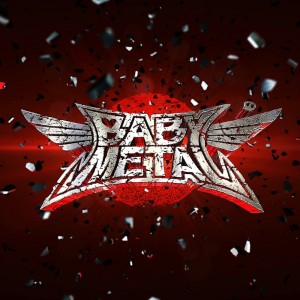 I’m rarely at a loss for words when listening to a song. Babymetal is the latest sensation to hit Youtube and leave American viewers in confused silence. It’s not because we’ve never seen this before, but because we’re seeing two opposite things being slammed together into one creation. On one side, you have a metal band that could easily join the flooded generic metal market. On the other side, you have a trio of underage Japanese girls in skirts and pigtails singing like they’re hoping to be the next big pop sensation to screeching guitars. So. Seriously. Where do I begin?

Babymetal combines throat crushing metal riffs and blast beats with synthetic harmonies and ecstasy induced dance club bass tracks. Suffice to say, a hardcore Babymetal fan could easily show up to a concert and headbang to their heart’s content while fist pumping a glow stick and chanting to songs about eating chocolate. Come on, even the blackest souls in the metal community love chocolate. There are plenty of artists who’ve tried to breed different genres together and have only been met with criticism. People will shrug them off as the latest niche with no lasting impact. But what makes Babymetal linger in our mind longer? It’s a clever approach. They visually play into the perverse mind of a male dominated fan base. For others, it’s a humorous and bewildering experience to see adorable Japanese girls dancing across the stage to death metal.

But how do they stack up musically? It’s heavy and catchy with whatever style it’s blending. It feels like you’re about to watch a violent, cheery anime. The album flies through different styles of both sounds. Songs switch things up by playing death metal, power metal and heavy metal. For every riff they chug differently to, the girls switch up and down the Top 40 list. We’ll get those intermittent breaks of techno, rap and even dubstep, but that’s not say they both stray away from that formula and settle on a mellow Sevendust sound or belt out that heavy rock ballad. Other times you feel like you’re listening to a Dance Dance Revolution song or the latest rave mix. While every song feels unique, the album is very top heavy. Once you’ve passed through the first seven songs, you feel like there’s nothing new to be offered and they falter in delivering a complete album. They do end on a strong note with their final song.

While there’s definitely some songs I’ll be listening to in the future like “Megitsune” and “Akatsuki Akatsuki”, overall they’ll need to start getting past the initial shock value and begin to focus on their work. Presentation is nothing without craft unless your presentation is consistent and the main attraction. In this case, the presentation is cemented in their age. If they simply started trading out singers for younger girls, they’ll appear shallow and potentially show their true colors as a quick cash grab in the same vain as “American Idol”. If they let time take it’s course, the extreme minded perverts will feign interest as their adolescents idols show signs of maturity. What’s left will be those who are simply interested in the music and looking for the next big thing. They need to show those people they’re willing to take the music into a fresh theatrical direction and continue pushing deeper into this bizarre blend of J-Pop and hardcore metal. It’ll definitely be interesting to see if they can move past the novelty they’ve created.