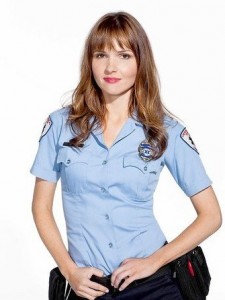 Valerie Azlynn is currently playing the role of Melanie on TBS’ new comedy series “Sullivan & Son”.  The show is created by Steve Byrne, who also stars, and Rob Long (“Cheers”).  Media Mikes had a chance to chat with Valerie about the show and what her inspiration was for her character.

Mike Gencarelli: How did you get involved with “Sullivan & Son”?
Valerie Azlynn: Well, it was a normal audition process for me. I met Steve (Byrne) and the guys during the audition and I thought we all worked well right from the beginning. Steve was so kind and cool during the audition process. Honestly it was a very fun audition. I left and just thought how awesome it would be to get to work with these people. I was shocked when I got the part. It not only made my day when I found out but my entire year. I was so excited.

MG: What do you enjoy most about playing Melanie?
VA: I personally enjoy how confident and semi-grounded she is. I would say she – if it is like a car – she is the axle. Nothing really works without the axle. It is always there and grounded. The guys are like the wheels and Steve is like the driver [laughs]. She is able to put everbody in check. I think Steve and her have a lot of similarities. If anything they are both extremely stubborn. I loved her relationship with the guys. They are her brothers as well. Even with my own brothers in real life, you can put them in check pretty easily…which is good.

MG: What is your inspiration for her character?
VA: I stole out of that from real life experiences. The rest of the character is stealing from Bea Arthur, Julia-Louise Dreyfuss and a lot from my grandmother. She was a really firey red-head, who not only put people in there place but told them where they were going to go. From being partially raised by her, I got this little attiude from her. So that is a big part of the character. Lastly I like to throw a little Angelina Jolie in there, since she is so sexy and cool. I don’t even know if she has anything to do with my character but let’s just toss her in cause it sounds good [laughs].

MG: Was it hard to keep it serious amongst a cast mostly of stand-up comedians?
VA: I think there were some moments where it was really hard to keep a straight face. I feel like I had done a ton of comedy and my background is improv. I think just the fact of staying in a scene and improvising, if anything it made me want to take the scene longer and further.

MG: What was your highlight from shooting on season one?
VA: I would have to say my favorite is actually “The Panty Theif” episode. I mean we include panties, a puppy and punching. It has everything. The real treat was working with John Michael Higgins. For me personally, he does work that if I was a dude I would totally want to emulate this career. So my plans is to do the female version of that [laughs]. But he is seriously funny as shit! He just reads a line and everyone goes into a riot. It is the same thing with Brian Doyle-Murray. There are just some people that are so extraordinary.

MG: How does this show differ from your past TV work?
VA: This show for me is just such a great experience. I get to be a regular on the show and not just coming in and supporting. I felt like I really got to be a part of the family. Also the way a sitcom is shot is such a great bonding experience. You are all together everyday of the week for a couple of months. When you are anactor, if you are going in and out of jobs with guest spots etc, those experience are great but you don’t get to have that constant bonding. There is such a charm with this cast. I developed great relationships with everyone from the very first day. I loved working with all of these people.

MG: What do you have planned next?
VA: I did another little spot on “Castle” for their season opener this Fall. I was on it last season for a couple of episodes also. It was really fun, I got to play a superhero. I just pop in and out. I haven’t heard anything yet about season two of “Sullivan & Son”. Maybe our fans will reach out and demand more episodes. I feel pretty good about it. All we do is try and make you laugh and I think the audience really appreciates that.