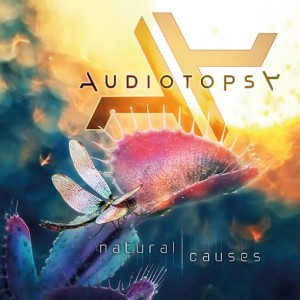 Heavy, Melodic and Atmospheric is how one might describe the debut offering from Audiotopsy titled “Natural Causes”. The group which features former members of Mudvayne, Hellyeah and Skrape has joined forces to create something new out of something old. “Natural Causes” which is being released via Napalm Records features 12 tracks from the newly formed group which fit almost as good as an old pair of shoes.

Don’t let the bands roster fool you. Audiotopsy is not just another preconceived metal super group. Yes, the group features former Mudvayne members Greg Tribbett and Matt McDonough along with Billy Keeton of Skrape and bassist Perry Stern but the tracks found on “Natural Causes” have a keen freshness with just enough familiarity to make them catchy. Tracks such as the albums opener “Headshot” and “Disguise Your Devils” are perfect examples of that new and old combo while tracks like “LYLAB” which features euphoric like verses and guttural chorus and the haunting “Distorted” break new ground. Probably my favorite track off the release is the double bass driven “Disguise Your Devils” which features a catchy hooks and a unique off time bridge that was quickly stuck in head.

Does Audiotopsy sound completely different from any of the previous works the members have been a part of? Not so much. Undoubtedly those sounds that the members are originally known for are etched into our brains making it hard not to compare the new and old. However there is just enough newness in the sound and style of “Natural Causes” to not only peak older fans interest but also draw in new listeners as well.