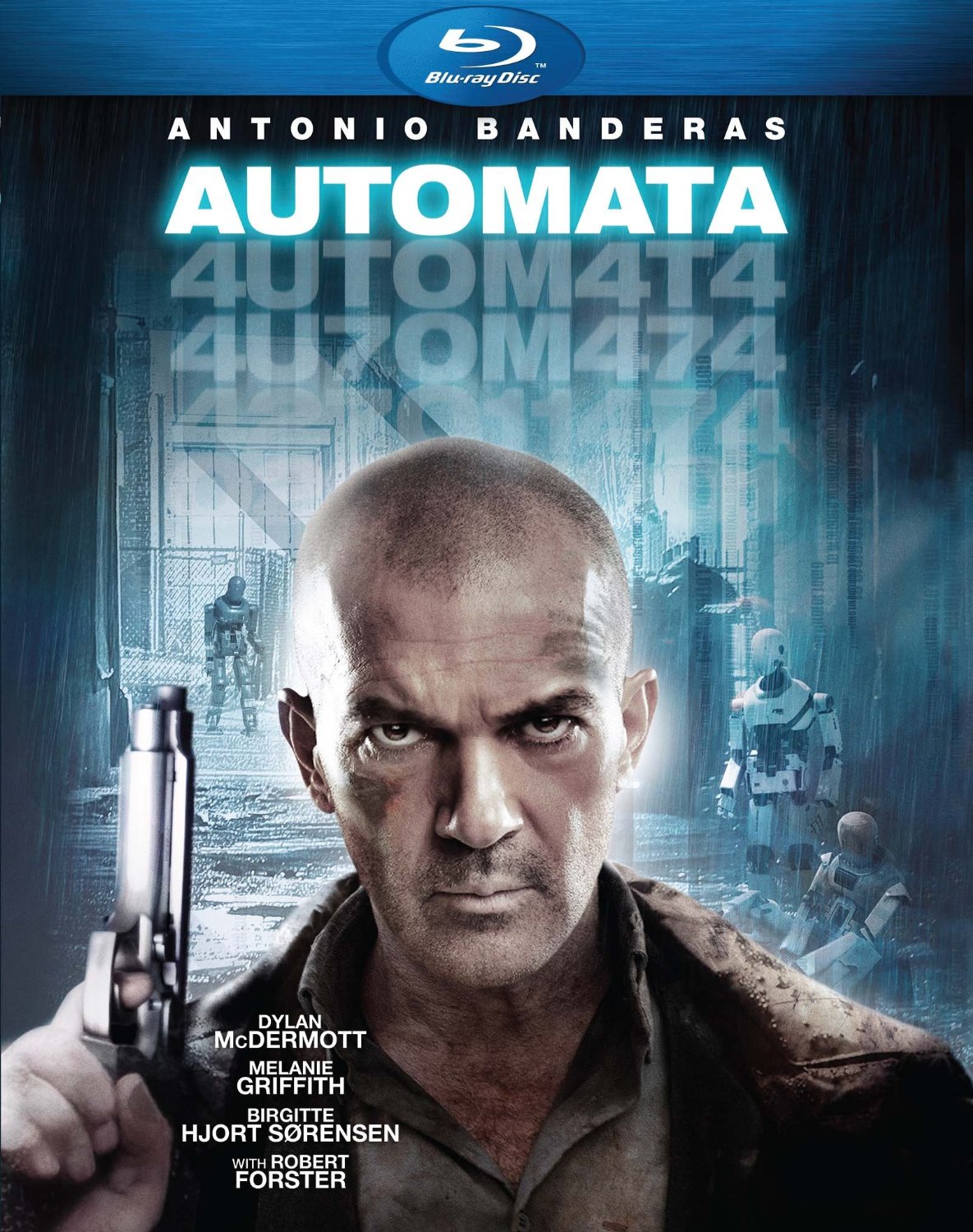 To celebrate the release of Antonio Banderas’ latest film, “Automata”, we are happy to be giving one Blu-ray of the film. If you want to win this prize, please leave us a comment below or send us an email with your favorite post-apocalyptic sci-fi film. This giveaway will remain open until November 28th at Noon, Eastern Time. This is open to our readers in US and Canada only. One entry per person, per household. All other entries will be considered invalid. Media Mikes will randomly select winners. Winners will be alerted via email.

In a future where Earth’s ecosystem verges on collapse, man-made robots roam the city to protect dwindling human life. When a robot overrides a key protocol put in place to protect human life, ROC Robotics insurance agent Jacq Vaucan (Antonio Banderas) is assigned to locate the source of the manipulation and eliminate the threat. What he discovers leads Vaucan, ROC Robotics and the police into a battle with profound consequences for the future of humanity.

Antonio Fargas is probably best known for his work on the popular 70’s television series “Starsky and Hutch.” As “businessman” Huggy Bear, his character had his ear to the street and often assisted the title characters in solving their cases. But Huggy Bear is only the tip of an iceberg that’s been forming for over five decades.

From episodic television to film to the stage, Fargas has carved out an impressive career by any standards. This coming Sunday, December 1, he appears alongside Bruce Boxleitner on the Up TV presentation of the holiday film, “Silver Bells.” While promoting the film Mr. Fargas took time out to discuss his new film, his musical career and a father’s pride.

Mike Smith: Can you give our readers a quick introduction to your upcoming film, “Silver Bells?”
Antonio Fargas: (laughs) Certainly. Well, after working for 53 years I finally find myself in a Christmas story. “Silver Bells” will remind you a lot of “A Christmas Carol,” where a man with some anger management issues can’t appreciate the benefits of what Christmas is about. Through his anger management classes and his having to do community service with the Salvation Army, he has an encounter with me. I take him on a journey, like the ghosts took Scrooge, through the process of softening his heart and opening him up to the spirit of Christmas. It’s a wonderful, feel good story.

MS: What attracted you to the project?
AF: That I was asked (laughs). No, I loved the challenge of the character. Being a character actor I got to do the dirty work when I was younger. But now, being older, I get to do characters like grandfathers, which is another acting opportunity. I feel that I can put my craft to work and tell the story. You’ve got myself and Bruce Boxleitner…two veterans who were cast to take a journey. It just seemed like the right time.

MS: You mentioned you’ve been working for 53 years…you’ve been successful in both television and film. Do you have a preference?
AF: I think there are two pure mediums. There’s theater, the well where it all started for me. I’ve had many great opportunities to work in the theater. And then there’s…well I used to say thirty-five millimeter film…but now it’s just movies. And television is really somewhere in between, though now they’re both treated as movies, what with shooting in digital and trying to get high definition. I love the craft of acting as it applies to theater but there is also television acting and film acting, where you have to employ a whole new set of techniques. I love segueing between the two. I love theater…that’s number one in my life…but I certainly appreciate the magic of film…the different departments that it takes to put a film together. I call it a “marriage” when a film is started and, at the end, it’s almost like a divorce or a death. Really, I love being an artist and being able to create. It’s like the painter with his canvas, or the man who spins the pizza dough and throws it up in the air. It’s all about being part of the creation.

MS: You’ve sung on film in the past and even played Cab Calloway on stage. Did you ever consider pursuing a musical career?
AF: I’m actually involved in a project called The New Jump Blues, which you can catch on YouTube. I’m doing a lot of Cab Calloway-type of performing. Music has always been a part of my life. But I’ve always had a fear of singing in public. I’m great in the shower, like everybody else (laughs). I’m thinking of teaching an acting class for singers because each song is really an acting experience. (You can check out Mr. Fargas and the New Jump Blues here https://www.youtube.com/watch?v=Bb6Q0Pf8Ezg)

MS: Prouder moment: winning an award for your work or watching Justin score a touchdown? (NOTE: Mr Fargas’ son, Justin, was a star college running back and played several years for the Oakland Raiders)
AF: (laughs) Oh boy! You know, just being on the stage of life is very rewarding. Watching Justin…he was a warrior, like me. He went out there and gave his all. And before every game he would run down to the end zone and get on his knees and pray. That’s one of the things they rarely show on television. After games, when the teams have spent the game beating their brains in, players from both teams would kneel down together and pray. Seeing that was the most rewarding thing for me. I’m very proud of him. Thank you for asking.

MS: What do you have planned after “Silver Bells” premieres?
AF: I have no idea (laughs). I live in Las Vegas and, in my community, I’m directing two plays with two different theater groups. That’s where my focus is at the moment. But I’m sure that, after a 53 year career, something else is coming!