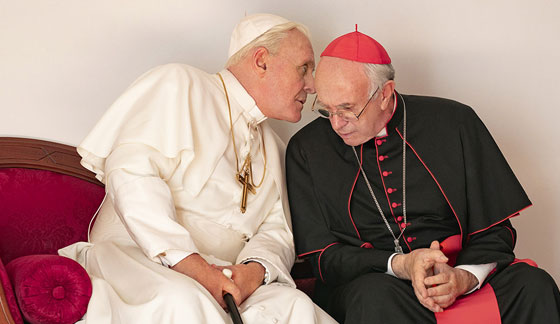 In 2013, the Catholic church faced a prospect it had not dealt with in 600 years when Pope Benedict XVI decided to step down as head of the Catholic Church. Jorge Mario Bergoglio was named as his successor, taking the title of Pope Francis. The official reason Benedict gave was declining health but he also did so in the face of mounting progressive movements among the global congregation as well as the rampant allegations of sexual abuse from clergy. In Netflix’s new film, The Two Popes, writer Anthony McCarten (“Darkest Hour”) stages an imagined meeting of the minds between Benedict and Bergoglio before this changing of the guard. Each of the men having crises of faith and trying to convince the other to keep or take on the title, respectively. Fortunately for director Fernando Meirelles, acting legends Anthony Hopkins and Jonathan Pryce stepped in to play these two. Unfortunately for viewers, their discussions do not dominate the entire film as you might hope nor do those talks address the church scandals in a meaningful way. That Meirelles’s film manages to tread through such tonally rocky terrain without more of an issue is down to great performances from Pryce and Hopkins.

Meirelles’s film opens amidst the death of Pope John Paul II and the ensuing 2005 papal conclave. The highly secretive process requires a super majority of the cardinals convening in Rome to elect a new pope. Publicly it was a spectacle in which crowds gathered in St Peter’s Square in eager anticipation of seeing white smoke to signal that choice had been made. The interior specifics of this conclave were under official oaths of secrecy. The film brings this all to vivid life within a recreation of the Vatican and introduces Bergoglio (Pryce) and Ratzinger (Hopkins) as opposing roads for the church to take at this crucial moment in time. Ratzinger is the more conservative of the two and glad-hands the other attendees like a politician while Bergoglio downplays talk from his peers who insist he is also a favorite. Ratzinger, redubbed Benedict, wins the votes.

Anthony McCarten’s script is based on his own stage play of this story and the best parts of this film felt like a stage production. The film easily moves from the spectacle of the conclave to the intimate summit between Hopkins and Pryce with Bergoglio seeking to tender his resignation from a Benedict who refuses to grant the request. Hopkins plays Benedict here with an air of mischief that lifts all their interactions. Bergoglio is pressing Benedict with his sincere desire to leave while Benedict brushes him off and inconveniences him at every turn. Their dialogue is also peppered with charming little old man moments. Bergoglio being the more “in touch” of the two brings both ABBA and the Beatles into the discussion for example. But once the gravity of Benedict wanting to leave takes priority–he speaks of losing touch with the voice of god–and Bergoglio’s reluctance has to be supported by how he got to where he is, the film drags. As interesting as it is and as capable an actor Juan Minujín is at playing the younger version of Pryce in war torn Argentina, it shifts the focus of the film down in taking it entirely through his past.

It’s also jarring to have the two old men watching the World Cup as though they’re in a set up from Michael Winterbottom’s The Trip while literally dropping out the audio of Benedict confessing regarding the abuse scandal later in the film. Such a jarring decision when we’ve already seen a lot of Bergoglio’s rough past, made me wonder if they knew acknowledging this darkness was a bridge too far in tone, your mileage may vary. Either way, I was grateful to see these two acting legends share the screen as much as they did.

The Two Popes is now streaming on Netflix

While “Avengers: Age of Ultron” was only about two and a half years ago, it feels like an eternity since we last saw Thor (Hemsworth). It can easily be said that Thor’s cameos in other Marvel films are a lot more enjoyable than his own feature length vehicles. That’s mainly because his two previous movies are devoid of mentally stimulating storytelling, hollow villains and an inescapable sense of forced plotting. Luckily, third time’s the charm for the God of Thunder.

In an attempt to get to the meat of the story, “Ragnarok” spends the first handful of minutes rushing through plot points about Thor, Loki, Odin and Jane Foster, and what they’ve been up to since we last saw them. It’s taxing, especially since no one really cares about Odin and I think Loki is a reminder of Marvel’s previous attempts to make him more of an imposing bad guy than he actually is. But it’s during these clichéd moments that “Ragnarok” still manages to find fun and establish tone.

For instance, the cold open finds Thor having the most fun we’ve ever seen him have on screen. With a flick of his wrist and a twirl of his hammer, he obliterates dozens of faceless foes, and it’s all set to Led Zepplin. We also get a much needed detour from the story line catch-up with Doctor Strange (Benedict Cumberbatch). His cameo is unexplained and seemingly unnecessary, but it’s certainly one of the most delightful highlights of the film. Once the film catches up on two years, we meet the Goddess of Death, Hela (Blanchett)

Hela may be the blueprints needed for a Marvel universe in sore need of a compelling, yet dangerous villain. Hela is a genuine threat, demonstrating her overt God-like powers throughout. Her first scene shows her destroying Thor’s hammer with a singular flex of her arm and disregarding Thor’s threat much like a pesky fly. There’s a charming menace behind her smile as she slaughters countless soldiers on her way to Asgard’s throne. Blanchett’s performance is simply magnetic.

Most Marvel films know how to have fun, but “Ragnarok” is an entirely new beast. It draws upon child-like humor, usually seen in more mature Saturday morning cartoons. The film expertly utilizes humor to introduce new characters flawlessly and in minimal time. Jokes convey their attitudes and mentality easier than any drawn out exposition could. It also helps when you have the Incredible Hulk (Mark Ruffalo) aggressively stomping around like an upset Kindergartener. Director Taika Waititi deserves a lot of credit for taking the title character and its world in such a retro direction so that’s equally lighthearted and visually joyful.

“Ragnarok” isn’t breaking the established Marvel mold, as much as it wants to. Film executives might have pulled their hair out if the film didn’t still lean on protagonist redemption subplots, cheeky squabbles amongst allies and fanboy pandering. That shouldn’t take away from Waititi’s vision. He’s brought his own brand of goofiness, managing to make the film and its characters crass, yet warm, and brutish, yet charming. “Ragnarok” is a dazzling space opera that finally gives Thor meaningful purpose in the vast Marvel cinematic universe.