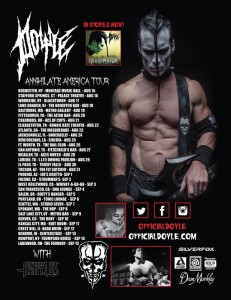 Former Misfits guitarist Doyle Wolfgang Von Frankenstein kicked off his “Annihilate America Tour” at the intimate Montage Music Hall in Rochester, NY on August 15th and despite several last minute set backs which included being stranded in New Jersey the night before and the band’s drummer quitting several days prior the band simply named “Doyle” proved that nothing was going to stop them from hitting the road in support of their debut release “Abominator” and pulverizing the masses.

Tension was certainly in the air for the tours opening night as band and crew members scurried about the venue after a late arrival due to Doyle and company experiencing last minute transportation issues. Combine that with the group’s drummer Dr. Chud leaving the band only a few short days before and any lesser band would have called it quits even before starting. Thankfully that wasn’t the case. Kicking off the night was Rochester’s own The Isotopes. The 4 piece instrumental act took to the stage donning horn rimmed glasses, green ties and pocket protectors flanked by an impressive light show complete with two lovely go-go dancers. Equally impressive to the bands stage show was their tight sound which seemed to mix 60’s surf music with Iron Maiden like solos and pure punk rock energy.

Though the crowd was still filing in through the venue doors it did little to sway the bands presentation. Up next was the direct support act for the tour Ashylus Hailing from the Pacific Northwest the 5 piece metal-core band quickly elevated the rooms growing excitement as they blasted through songs of their album “Leave Your Mark” which was released earlier this year. After the bands powerful 30 minute set headliners Doyle would take the stage to close out the night. The band consisting of Cancerslug vocalist Alex Story, Bassist Left Hand Graham, Doyle Wolfgang Von Frankenstein and the bands newest member drummer Anthony “Tiny” Biuso.

The band took the stage basked in a red and green glow as Doyle’s signature guitar tone blasted through the towering stack of speakers which flanked both sides of the stage. Before you could blink the band launched in to “Abominator” the title track off the group’s debut album. Doyle pummeled is guitar repeatedly as singer Alex Story belted out lyrics with a guttural growl. The bands set was a perfect mixture of new songs like “Valley of Shadows” and “Headhunter” to Misfits classics such as “Hybrid Moment” and “Where Eagles Dare” and “Last Caress”.

Though the band still had a few kinks to work out as working in a new drummer just days before a tour requires quite a few adjustments however a few small bumps in the road didn’t stop the band from delivering a blistering set that left peoples jaws on the floor from just the sheer impact of the bands volume. Doyle and company proved that they are hell bent on domination and If the same power they brought to the tours opening night continues throughout the rest of the tour then nothing will stand in their way.