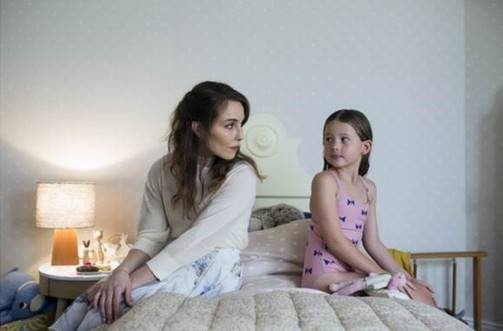 Angel of Mine, based on the French 2008 film, L’Empreinte de L’ange, sees Noomi Rapace as a woman convinced that her neighbor’s daughter is actually her own long-dead child. It’s a thriller that drew me in with its strong cast but passes too far over into melodrama before the credits roll to warrant much interest.

Rapace stars as Lizzie who drums up a tenuous relationship with the parents of one of her son’s friends (played by Yvonne Strahovski and Richard Roxburgh) for her own ulterior motives. Turns out the friend’s little sister Lola looks so much like her dead baby daughter to Lizzie that she is desperate to spend as much time around the child as possible. Lizzie’s obsession extends so far as her ingratiating herself with Lola’s parents by pretending to be interested in buying their newly listed house. This connection is already awkward but the film does not help itself by withholding the circumstances around Lizzie’s grief for so long in the film. Revelations over the loss of Lizzie’s daughter earlier in the film to the couple may have won some understandable sympathy points for allowing Lizzie around but as it is, it strains credulity as to why these parents would allow this random woman to have so many one-on-one interactions with their young child. Lizzie’s obsession with Lola is intriguing at first due to Rapace’s haunted intensity but without knowing much about her past, I found myself spinning off many different possibilities for where this could go and the ultimate resolution had me bored. Perhaps that’s on me for wanting something more outlandish or exciting while the film so wants to be grounded. It felt as though since director Kim Farrant wanted so much for Lizzie to be our sympathetic protagonist that they could not inject her obsession with a child with any sort of genuine menace.

Still more irritating is that so much of the film’s run time is spent with husbands choosing to downplay their wives’ legitimate concerns. This goes for both Luke Evan’s Mike as Lizzie’s ex, shunning her where she clearly needs mental help in her grief, and infuriatingly Richard Roxburgh’s Bernard who is for some reason A-OK with a woman wanting to spend time with his seven year old while his own wife sees red flags all over. Why would he take Lizzie’s word over hers? How their story lines end up in relation to Lizzie and Lola after all this drama rings hollow–and also doesn’t seem legally feasible.

I had been drawn in by the big name cast Farrant had assembled, particularly Yvonne Strahovski fresh off of her fantastic “Handmaid’s Tale” work (is there such a thing as ‘maternity battle’ typecasting?) but they’re working in service of a basic script that doesn’t throw anything more exciting at them than a Lifetime TV movie.

Angel of Mine opens in limited release on August 30th