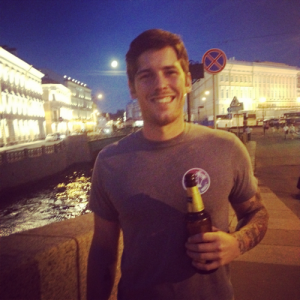 Zack Merrick is best known as the bassist for the pop/punk band All Time Low. However in his down time away from the band he designs limited addition clothing for his company Amerrickan. Zack took time out of his busy schedule recently to discuss the clothing line his partnership with Killbrand and gave us an update on All Time Low’s upcoming album.

Adam Lawton: What can you tell us about the new run from Amerrickan?
Zack Merrick: Right now we have pulled everything off of our website because we are trying to push the designs that are on hottopic.com. So anyone wanting to pick up some of our designs can get them directly through Hot Topic.

AL: What was that initially interested you in doing a clothing line?
ZM: It was a great way to keep myself creative while I wasn’t playing music. I started taking photos and Jonny from Killbrand really liked them. We saw that there was a great response so we teamed up together and started Americkan.

AL: Can you tell us a little more about your partnership with Jonny and Kill Brand?
ZM: We have a lot of “joint meetings” and “joint files”. (Laughs) Jonny is like my big brother. He takes care of me and is always looking out for me and worrying about me. He is just as worried about me as my mom is sometimes. Jonny is super easy to work with and it’s really a lot of fun. When I head to California to work on designs with him I usually end up staying on his couch

AL: Most of the line is done as limited edition runs. Can you tell us a little bit about that decision?
ZM: It’s easier for me to make designs and think of things in a limited run. It’s also a unique way of doing things so that only 50-100 fans can get a shirt instead of everyone having the same shirt. This way you don’t over saturate the market.

AL: Can you give us an update on All Time Low and what the band has planned for the coming year?
ZM: I just finished recording my bass tracks the other day. Alex is in the studio currently working on vocals and guitar tracks. As a whole we are all gearing up to start press for the new album along with some doing some new photo shoots. We start touring in February over in UK with You and Me at Six and then we bounce around the planet to Australia then back to the States and so forth. With the new record coming out in 2015 it should be a good year and a long touring run.