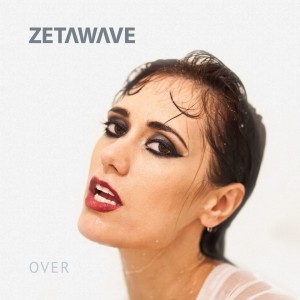 Zeta Wave is the musical alias of Aliya Hashemi an up and coming singer-songwriter from Seattle, WA. Her unique sound draws influences from a variety of genres ranging from A Tribe Called Quest to The Beatles and Fiona Apple. Zeta Wave’s debut EP “Over” was released in mid October of this year and Media Mikes had the pleasure of speaking with Aliya recently about the new EP, her first exposure to music and the benefits of being an independent artist.

Adam Lawton: How did you get started in music?
Aliya Hashemi: That is something that goes way, way back. I had gotten a little red piano for Christmas when I was about 4 and from there I just loved anything that made noise. I learned piano when I was 8 and then moved on to flute when I was 12. I wrote my first song around that same time. It was actually an answering machine recording sung to the tune of the “Addams Family” theme song. (Laughs) Also during this time I began to be really drawn to the electric guitar. I don’t know why but it was something I had to do. From there I just started writing more and more songs.

AL: Tell me how you came up with name Zeta Wave?
AH: I have always had some reservations about going by just my name. I think sometimes when that is the case you can easily get billed as a singer/songwriter. I never really wanted to go the Folk route as I feel I have a little more of an edge. I was talking with a friend one night and we threw out the name “Zeta Wave”. I thought it was kind of interesting and spacey. Space is something I have always been interested in so I think it works.

AL: What can you tell us about the new EP?
AH: I have wanted to record now for some time. As I mentioned before I have been writing songs for quite some time. It really a big endeavor when you are putting everything together on your own. It’s pretty amazing now that it’s all done. I am excited to finally have an EP that’s done to the quality and standard that I want. There’s a song on the EP titled “Waltz” that is very dear to me. I lived in Seattle for a long time and the weather especially the winters are very depressing. This song is about being a part of something bigger than you despite what might be going on at a specific moment. It’s basically a love song.

AL: Can you tell us about the first single “Strange Heart Beat”?
AH: That song was one of a bunch that was written during a breakup I was going through. This was one of my favorite from those songs. It has a really catchy chorus and goes over well live. It actually features Zach Nicita from MSMR on drums.

AL: Can you tell how you ended up working with Zach?
AH: Well that song wasn’t originally going to be on the EP but we had some extra time so we added it to the release. A friend of mine turned me on to Zach’s YouTube videos and I thought he was just amazing. I sent him a message through Facebook asking if he would play on the track and he actually responded. It took a little while to get the track done as he was on tour with MSMR but I was patient and that track turned out really great. Zach is a guy who you can tell really loves music so getting to work with him was great.

AL: What is your creative process like?
AH: It has changed over the years. It seems as times goes on I tend to start with the melody. It might be just something I hear in my head and then leave myself a voice memo on my phone. Other times I might be playing guitar and I work out a phrasing and build a melody off of that.

AL: Do you have any live shows coming up in the near future and, what do you enjoy most about performing for a live audience?
AH: I hope to do a little more recording, possibly shoot some videos and then start touring in the spring. I did a solo tour a couple winters ago as I figured it would fairly easy to put together since it was just going to be me and my guitar. One of the shows I did was in Washington near my home town and the weather wasn’t the greatest out so I figured the show probably wasn’t going to be overly crowded. There happened to be some older men there that stayed for show and listened to me sing all these songs about break ups and whatever else. They were probably the most intent listeners. It felt like I was singing to my grandfather which was just so great. I love the direct and honest connection you have with the audiences.