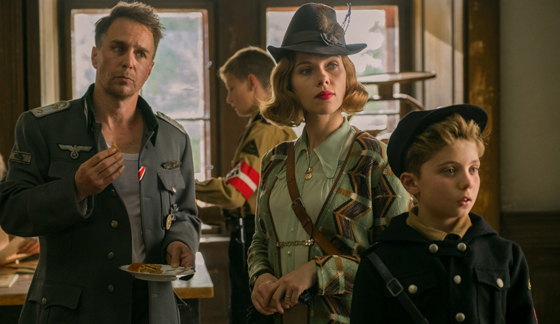 I don’t know how a movie featuring an imaginary Adolf Hitler managed to be one of the most heartwarming films of the year…but it’s 2019 and every day actual reality gets more ludicrous, so that sounds about right. Taika Waititi’s Jojo Rabbit is a masterful satire that nails its tone with a kind of supernatural precision that most filmmakers can only dream of and a story still more wouldn’t touch with a ten foot pole.

Jojo (Roman Griffin Davis) is a small boy who lives with his mother Rosie (Scarlett Johansson) in a village in WWII Germany. His only ambition is to fight for Hitler just like his absent father. Lacking any real warfront nearby and too young to be conscripted, Jojo instead joins up with the local division of the Hitler Youth headed by the one-eyed Captain Klenzendorf (Sam Rockwell). It’s a lot like boy scouts if all the participants were extremely racist and whose bonfires consisted of banned books. Jojo plays tough but gains his titular nickname when the older scouts test how murderous Jojo actually is and the kid fails to kill a bunny in front of the everyone.

Jojo is not only disappointed with himself but he’s royally failing Hitler! Specifically the imaginary Fuhrer, played by Waititi himself, who follows Jojo around and goads on Jojo’s tough guy persona. To be clear, Waititi isn’t actually playing Hitler (in fact when asked about ‘researching’ his portrayal, the director says he didn’t because that guy was “a fucking cunt.” Yep.) Instead, he is playing an icon to a child, which is an entirely different prospect. In Taika’s take just about the scariest thing about him is the unnatural blue contacts. He’s a playground bully who spouts back all the vile lies about Jewish people the boy’s troop leaders are trying to drill into him. Jojo’s whole bubble is popped when he finds an actual living Jewish girl named Elsa (Thomasin McKenzie) in his mother’s attic.

With McKenzie’s arrival, the film begins to become something much more than the riotous comedy that Waititi achieves in laying out Jojo’s life in the scouts. (Although if this film had only given me a burnt out Sam Rockwell demonstrating deadly weapons to a group of small children, I would have still considered it a cinematic gift, but I digress.) No, rather than being fearful, Elsa leans hard into the gross mythos the Nazis are spreading about her people in order to intimidate the young Jojo. It’s one thing to tell a ten year old that Elsa is a demon, entirely another to ask him not to then be terrified when faced with her one on one. Their bond is the heart of the film and McKenzie wields what small power she has over Jojo with ferocity while Jojo steadily moves from fear into fascination and maybe even friendship. Mckenzie’s is a stunning performance that has me more excited to see her in Edgar Wright’s next feature. As for Davis, putting the weight of this movie on the ten year old is thematically fitting but a huge risk. However just like Hunt for The Wilderpeople’s Julian Dennison, Waititi’s casting of Davis proves to be spot on.

Meanwhile these kids are surrounded by the grown actors putting in some truly beautiful work. Sam Rockwell’s one eyed captain is physically out of commission but maybe that’s not the only reason he’s not on the field. Considering there’s nothing remotely straight about him and second-in-command Finkel (Alfie Allen). Scarlett Johansson is fearless as Rosie who lovingly calls Jojo “Shitler” and whose drinking, smiling facade belies her own defiance. After all, her sheltering Elsa is a huge breech of the law. Still Rosie dances, she bike rides and she declares her dinner table neutral Switzerland. Johansson brings genuine depth and warmth to Rosie in both her bonds with Jojo and Elsa.

Jojo meeting Elsa and beginning to encounter the larger world is where Waititi really hits home. Rosie allows Jojo into the Hitler Youth only insofar as she is a single mother and there’s really no alternative daycare. But when face to face with his supposed enemy, Jojo’s whole worldview is challenged.  Hate cannot flourish without ignorance and it’s the ordinary people in this film whose small acts make the larger world better for all. Taika’s crafted a film that’s not only timely but manages to earn tears both from laughter and sadness.