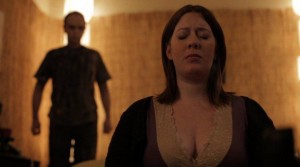 Phase 4 Films definitely has a hit on their hands with this little gem. I honestly have never heard of this film, despite being a horror buff. The film has won over 20 awards at various film festival. What makes this interesting is that it has a unique story, it has some great scares and also surprising twists throughout the film. It is rare that a horror film really stands out among the many, many others but this one does it and deserve some attention. Horror fans will also be delighted to that Doug Jones (“Pan’s Layrinth” and “Hellboy” series) co-stars in the film. I am looking forward to see what Mike Flanagan does next as now he is officially on my radar.

The film follow two sisters Tricia (Parker) and Callie (Bell). Callie comes to stay with Tricia, who’s husband Daniel (Levine) has been missing for seven years. Tricia is planning on officially reporting her husband as dead, when she starts to have visions of him. Callie finds herself drawn to a creepy tunnel that she’s meets a homeless man (Jones) who is mysteriously shocked that she can see him. Callie finds that the man has been reported missing years ago also like Tricia’s husband. Strange things continue to occur to the sisters until Daniel, out of the blue, shows up at the house after seven years missing and no account of the time. Callie believes that strange supernatural forces might be at work here and tries to investigate the mysterious tunnel and the weird happenings. The sisters might have gotten too deep into this whole situation as the mystery draws them in.

The special features are very impressive and come stocked. First of all there are two commentary tracks. The first is a producer commentary with Morgan Peter Brown, Mike Flanagan, Joe Wicker and Justin Gordon, which focuses on the film’s production and the goal of making a horror film on a low budget. Next up is a really fun jam packed commentary track with director/producer Mike Flanagan and the film’s stars Katie Parker, Courntey Bell, Dave Levine and Doug Jones. Next up, there is a very extensive behind the scenes documentary “Absentia: A Retrospective”, which runs just over 30 minutes. There are about five minutes of deleted scenes, worth checking out but nothing special. There is a “Camera Test Teaser”, which was shot to evaluate the effectiveness of shooting in Canon 5d. Lastly there is also the film’s trailer included.