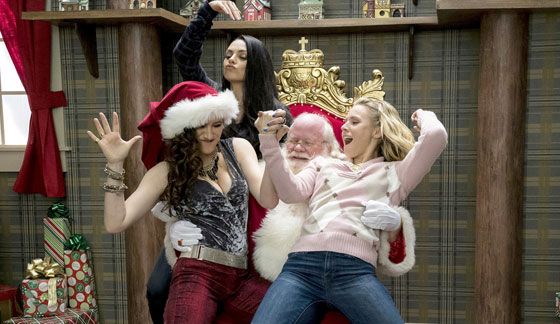 Soon it will be the season for presents and mistletoe, Santa and his reindeer. And family. I always welcome the chance to see my mom over the holidays. Of course, my mother is nothing like Ruth (Christine Baranski), Sandy (Cheryl Hines) and Isis (Susan Sarandon). Thank God!

Just as funny and, even though I never thought it possible, raunchier then “Bad Moms,” “A Bad Moms Christmas” finds our heroines from the last film getting things in order in the last week before Christmas. Amy (Kunis) is now happily dating Jessie (Jay Hernandez) and is unprepared when her very wealthy and judgmental mother Ruth shows up a few days before she was expected. Same with Kiki (Bell) and her mom Sandy, a woman who has become more and more clingy since her husband died. And Carla (Hahn) never knows when to expect Isis (her mom, not the terrorist group). She only knows it’s when she needs to borrow money. ‘Tis the season!

Blame it on “Bridesmaids.” Ever since that movie came out and made almost $300 million world-wide, Hollywood has inundated moviegoers with all kinds of “women talking dirty” films. For every funny and successful film, like “Trainwreck” or “Girl’s Trip,” you also have to put up with “dirty talk for talk’s sake” in a movie like “Rough Night.” (I did give “Rough Night” a positive review but did note that a lot of it’s raunch was for shock value, not laughs).

“A Bad Moms Christmas” works mostly because of two things: the cast and the script. The film was written, and co-directed, by Jon Lucas and Scott Moore, who in the past have written, among other films, the first “Hangover.” They obviously know what works where funny is concerned. All six female leads, mothers and daughters, work great together and, on a personal note, a movie that features two of my three biggest Hollywood crushes, Baranski and Sarandon, has got to be enjoyable. If Judith Ivey had played Sandy I’d have given this movie five stars!

If you like to laugh, and if you like your humor extremely “R” rated, then there’s an early Christmas present waiting for you at the multiplex!

Media Mikes has teamed with it’s friends at STX Entertainment to give 35 of it’s readers and a guest the chance to be among the first to see the new outrageous comedy “A Bad Mom’s Christmas.”

The screening will be held on Monday, October 30th, 2017 at the Cinemark Palace at the Plaza in Kansas City and will begin at 7:00 p.m.

All you have to do is click here and download your pass. This is a first come/first serve contest. Once the 35 passes have been claimed the contest is over.