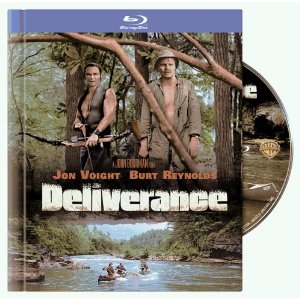 It’s really hard to believe that “Deliverance” was released 40 years ago.  I remember the first time I say this film as a kid and being completely mortified.  The film is such a classic and packs some of the most notable quotes and music in film history.  I mean who doesn’t love the “Dueling Banjos”?  This 40th Anniversary Edition release DigiBook is a real improvement from Warner’s last Blu-ray release back in 2007.  I have to say this film probably contains the best performances from its cast Burt Reynolds, Jon Voight and Ned Beatty.  If you are a fan of this movie, it is worth the upgrade if you have it on Blu-ray and if you don’t it is a simple no-brainer.

This 40th Anniversary Edition release of “Deliverance” comes in my favorite packaging, DigiBook.  I am a huge fan of this type of packaging and it really adds a lot of value for fans of the film and much better than an empty plastic case.  This film really excels it its 1080p video transfer and looks amazing with its aspect ratio of 2.40:1.  Though the spotlight of this release has to go to Warner’s DTS-HD Master Audio 5.1 surround track.  It is a new lossless mix and really adds a lot to the release value.

For those looking for more value, the special features are impressive and contain a newly produced retrospective with the film’s leading men.  “Deliverance: The Cast Looks Back” runs about 30 minutes and features Jon Voight, Ned Beatty, Burt Reynolds and Ronny Cox reflecting back on the production, 40 years backs. It is a great new features.  There is a rehashed “Four-Part Retrospective” from the 2007 Blu-ray release, which covers from author James Dickey’s best-selling novel to the shooting on locations to the notable Dueling Banjos scene and many of the controversies that have surrounded this film.  There is an audio commentary track with Director John Boorma, which is decent but nothing special.  Next up there is a “The Dangerous World of Deliverance” which is an awesome vintage featurette, dated but still super cool.  Lastly there is a theatrical trailer included.

Premise: Four city men on a weekend canoe trip pit their nerve and muscle against the churning waters of a wild Georgia river — where only three are “delivered” from the heart-pounding experience. 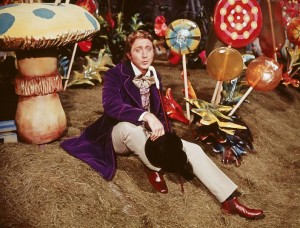 Ultimate Collector’s Edition: 5 out of 5 stars

I have seen “Willy Wonka & The Chocolate Factory” an uncountable amount of times. I have also interview most of the cast/crew, check it out here. It is for sure in my top 5 films of all time, no question. So obviously, I will not need to say more about the film…and plus who hasn’t seen “Willy Wonka & The Chocolate Factory” at least once. When this film came to Blu-ray, I think I smiled for a complete 24 hours straight. The film is meant for this format. The colors are so vibrant, rich and brought to life on this release. The sound and music are perfect and really makes singing along very easy…come on, you all know the words. Now with the Ultimate Collector’s Edition, we get the perfect beautiful Blu-ray release and SOOOOO much more…

Besides the Blu-ray and DVD disc, the set some with a 144-page paperback book, “Pure Imagination: The Making of Willy Wonka & The Chocolate Factory” from director Mel Stuart talking about the production from behind the scenes. Next is a replica production correspondence in a heavy paper envelope and it contains 14 letters.  A reprint of the cast list, a letter from producer Stan Margulies to Pia Arnold, a handwritten letter from Gene Wilder to Mel Stuart, a note from producer David L. Wolper to Mel Stuart and some of the letter included. There is a Wonka Bar tin container which holds four multi-colored scratch-n-sniff pencils and a scented chocolate eraser. There is also a replica of a Wonka golden ticket with an online code for a new prize giveaway. I mean if all that isn’t worth the purchase alone then you obviously aren’t a fan of this film.

The special features are a little light and not in HD but there has never been real extras on any of the releases in the past so it is not a shock. Being a fan of this film for almost 30 years, the audio commentary is worth the price of the set alone which included all five Wonka kids, Peter Ostrum (Charlie Bucket), Julie Dawn Cole (Veruca Salt), Paris Themmen (Mike Teevee), Michael Bollner (Augustus Gloop) and Denise Nickerson (Violet Beauregarde). It is fun and very entertaining. The first extra is called “Pure Imagination: The Story of Willy Wonka & The Chocolate Factory”, which runs about 30 minutes and pretty much is a verbal coverage from Mel Stuart behind the scenes book. There are four karaoke-style sing-along videos for “I’ve Got a Golden Ticket,” “Pure Imagination,” “I Want It Now” and “Oompa-Loompa-Doompa-De-Do.” Come all though…we all know the words! There is a really cool vintage featurette from 1971, which is really interesting and of course disc 1 wrap with the 1971 theatrical trailer. The second disc only has two special features first with “Mel Stuart’s Wonkavision” which is a new featurette that has Mel Stuart reminiscing about the film. Lastly, “A World of Pure Imagination” is a newly found vintage featurette with the interview with author Roald Dahl.

Synopsis: A poor little boy wins a ticket to visit the inside of a mysterious and magical chocolate factory. When he experiences the wonders inside the factory, the boy discovers that the entire visit is a test of his character. Special Features: Scrumptious Documentary, Pure Imagination: The Story of Willy Wonka & The Chocolate Factory, Mouth Watering Commentary With The Wonka Kids, 4 Sing-Along Songs, Vintage 1971 Featurette, Stills Gallery & Theatrical Trailer.

Available on Blu-ray Combo Pack, DVD, On Demand and for Download 10/18! http://bit.ly/oSDajR