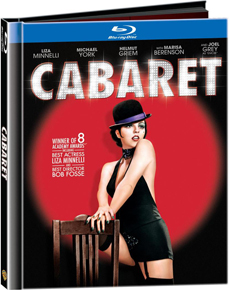 Musical and film fans will be pleased to own Warner Brothers’ blu-ray release of Bob Fosse’s 1972 classic, Cabaret.

Official Synopsis: Flamboyant and eccentric American entertainer Sally Bowles (Minnelli) sings in Berlin’s decadent Kit Kat Club, even as Nazism rises in Germany in 1931. She falls in love with a British language teacher (York) – whom she shares with a homosexual German baron (Griem). But Sally’s insular, carefree, tolerant and fragile cabaret world is about to be crushed under the boot of the Nazis as Berlin becomes a trap from which Sally’s German friends will not escape.

Even forty years later and amidst modern movie musicals such as Les Mis and Chicago, Cabaret still maintains its edge. It’s perhaps because of Joel Grey’s disturbingly impish Master of Ceremonies that we never quite get to know while his Kit Kat Klub performances are all too aware of, if not concerned by, the dark times brewing outside. It was not for nothing that one of this film’s eight Oscar wins was for David Bretherton’s film editing, which among other structural coups features Grey doing a gleeful German slap dance as we watch a man beaten by Nazis.

Bridging the gap between the club and the outside world at the center of the film is Liza Minnelli’s brash American entertainer Sally Bowles. Bowles may seem at first to be the manic-pixie-dreamgirl to York’s straight-laced Brian Roberts but she’s much more than that. On top of the powerhouse performances Minnelli gives to such classics as “Maybe this Time” and “Mein Heir”, she is by turns hilarious and heartbreaking as Sally’s eccentricities expose a loneliness and desperation for attention that she may finally get from York’s charming Brian.

Some of the major themes explored in the film such as homosexuality and abortion, though far more taboo at the time of the film’s release, still hit home today. Cabaret sharpened the edge on movie musicals in a way you’d be challenged to find in the big bright musicals of the sixties. That impact is more thoroughly discussed on this set’s new featurette “Cabaret: The Musical That Changed Musicals” which features the film’s stars as well as additional commentators. Most notably director Rob Marshall, whose Chicago was the most direct benefactor from the structure set in place by Cabaret.

As for the Blu-Ray remastering, which apparently involved the manual removal of a thousand foot scratch on the film’s original print, the film looks stunning. The effects of the remastering, the first done to the film in over twenty years, are most evident when you compare the feature presentation to the clips of the film utilized in previously produced (1997) featurettes “Cabaret: A Legend in the Making” and “The Recreation of an Era” which are also included here. Additional features included many of the cast sharing fond memories from making the film and are welcome additions if perhaps not new to any die-hard fans out there.