Volbeat confirm the release of Rewind, Replay, Rebound: Live In Deutschland, available digitally worldwide on November 27th via Republic Records. The new 27 song set features songs recorded during the sold-out German leg of last year’s Rewind, Replay, Rebound World Tour, along with two additional tracks recorded earlier on the tour. The album marks the first official live recordings of 11 songs from the band’s latest studio release, Rewind, Replay, Rebound as well as fan favorites from throughout the band’s career played in front of the their die-hard German fans in cities such as Stuttgart, Cologne and Hamburg. The set, mixed by long time Volbeat collaborator Jacob Hansen, will be available for streaming and download from your favroite digital service. Click here to pre-save.

Leading up to the release of Rewind, Replay, Rebound: Live In Deutchland, Volbeat will also be streaming three full shows from the Rewind, Replay, Rebound World Tour via their YouTube channel. The first of these, Live at the Barclaycard Arena in Hamburg, Germany, will be streamed on Thursday, October 22nd. Watch volbeat.dk for complete details.

Germany holds an important place in the story of Volbeat. From playing their first note on German soil at the Rock Hard Festival in Gelsenkirchen 14 years ago, Germany has embraced the band and lovingly christened themselves the band’s “second home.” Says vocalist/guitarist Michael Poulsen, “the German audience has always had a special place in our hearts, since the very beginning. They have always supported us and still do. It’s amazing to see the impact the fans have had on Volbeat, we’ve become fans of theirs, too.”

VOLBEAT emerged from Copenhagen in 2001. Since then, they’ve tirelessly clawed their way to hard rock’s upper echelon with endless touring, a string of seven beloved full-length albums which have sold 2.5 M copies in the US alone, and eight #1s on the mainstream rock airplay chart. Their 2010 album Beyond Hell/Above Heaven, which features hit singles “A Warrior’s Call” and “Heaven Nor Hell,” has received RIAA Gold Certification. 2013’s Outlaw Gentlemen & Shady Ladies, which includes the Grammy nominated “Room 24” and is also certified Gold, bowed at #9 on the Billboard Top 200 upon release, marking the highest U.S. chart entry for a Danish act since 1997. A distinction that Volbeat topped in 2016 when Seal The Deal & Let’s Boogie debuted at #4. The band also released Let’s Boogie! Live At Telia Parken, a concert film and album documenting their landmark 2017 Copenhagen show in front of 48,250 fans, the largest show a Danish band has ever performed in Denmark. Their latest album, Rewind, Replay, Rebound, was released on August 2nd, 2019 and has spawned the hit singles “Last Day Under The Sun,” “Die To Live (feat. Neil Fallon)” and “Leviathan.” 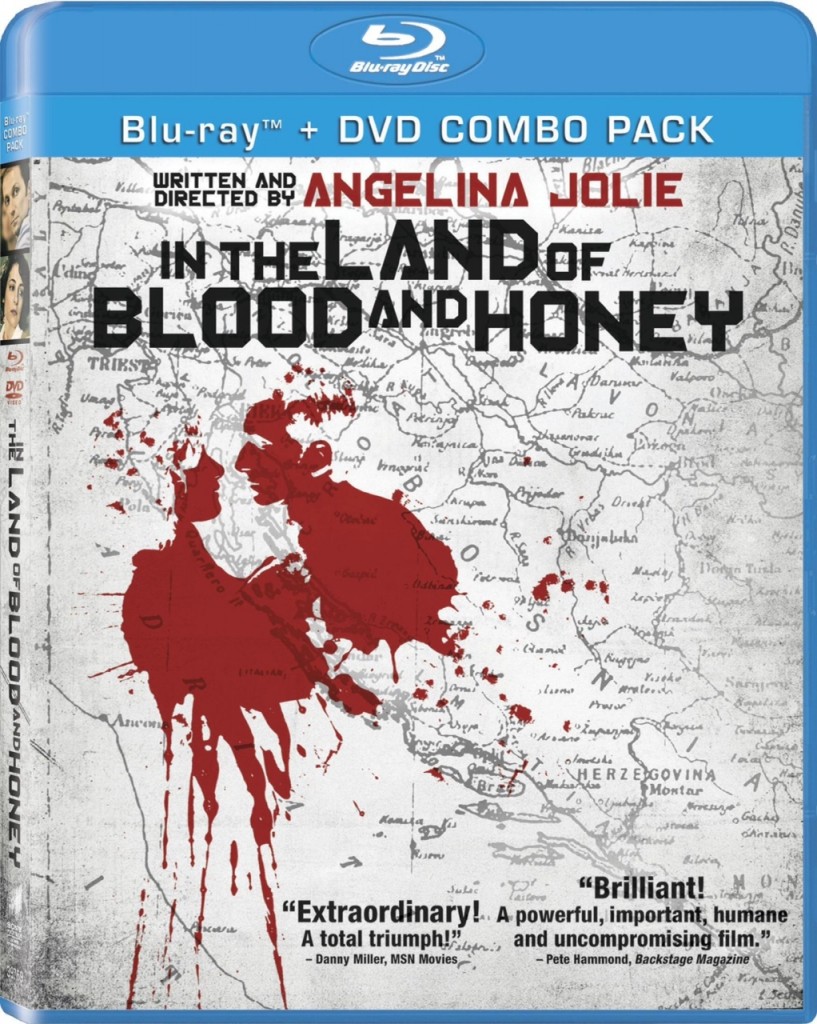 Featuring Both Authentic Language Theatrical and Never-Before-Seen English-Language Versions of the Film Available March 27th on
Blu-ray™ + DVD Combo Pack. Get Both Versions Early on Digital and VOD – February 24th*

Culver City, CA (2/13/12) – From Academy Award® winner Angelina Jolie (Best Supporting Actress, Girl, Interrupted, 1999) comes the acclaimed war drama IN THE LAND OF BLOOD AND HONEY, available March 27th on Blu-ray™ + DVD Combo Pack from Sony Pictures Home Entertainment. Jolie makes her stunning directorial and screenwriting debut with this gripping tale of love and survival set against the backdrop of the Bosnian War. Nominated for a 2012 Golden Globe® Award for Best Foreign Language Film, IN THE LAND OF BLOOD AND HONEY has been hailed by critics as “the starkest, most relentless film about war since Kubrick’s Full Metal Jacket.” (David Ehrenstein, Quarterly Review of Film & Video). Now, movie fans can experience this riveting film with a Blu-ray + DVD Combo Pack which includes two versions of the film –the authentic language film with English subtitles on the Blu-ray and the English language version featured on the DVD disc. Both versions of the film will arrive early on VOD and Digital on February 24th.

The Blu-ray combo pack includes a “Making of” featurette that goes behind the scenes of filming in two languages with a local cast, who share their painful stories of their personal conflict during the war. Exclusively available on the Blu-ray version is a Q&A with Jolie and Actress Vanesa Glodjo.

IN THE LAND OF BLOOD AND HONEY is the winner of the Producers Guild of America’s 2012 Stanley Kramer Award, which honors films whose “achievement or contribution illuminates provocative social issues in an accessible and elevating fashion.”

Synopsis: Set against the backdrop of the Bosnian War that tore the Balkan region apart in the 1990s, IN THE LAND OF BLOOD AND HONEY tells the story of Danijel and Ajla, two people from different sides of a brutal ethnic conflict. Danijel, a soldier fighting for the Serbs, and Ajla, a Bosnian held captive in the camp he oversees, knew each other before the war, and could have found love with each other. But as the armed conflict takes hold of their lives, their relationship grows darker, their motives and connection to one another ambiguous, their allegiances uncertain.

The film has a run time of approximately 126 minutes and has been rated R for war violence and atrocities including rape, sexuality, nudity and language.

Blu-ray™ and DVD Bonus Material:
· “The Making of In the Land of Blood and Honey” Featurette
· Deleted Scenes
Blu-ray™ Exclusive:
· Q&A with Writer/Director Angelina Jolie and Actress Vanesa Glodjo

“Academy Award®” is the registered trademark and service mark of the Academy of Motion Picture Arts and Sciences. 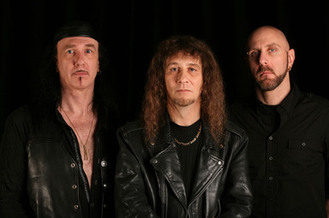 After a string of successful tour dates this past July, Anvil are back on the road again! Starting mid-October these metal Legends will work their way north across America to the west coast, making several stops throughout California, and returning to the east coast for the start of November.
As always they promise to bring a show that represnts the true rockers they are!

Anvil are true defenders of the faith and they’ve never lost sight of their vision to create uncompromising, dyed in the wool heavy metal. They have been on a rock ‘n’ roll journey for the past 30 years and while few bands can make it to the three year mark, Anvil have closed in on three decades of the most uncompromised and ear pleasing metal known to headbangers. The band’s career has developed into a very public rocket ride into the musical and pop culture stratosphere only recently, though.

Ever since the award-winning documentary Anvil! The Story of Anvil propelled the Canadian band from their respectable, hard-earned status as a band revered by the likes of Metallica, Motorhead and Guns N’ Roses, and not to mention, Anvil! director Sascha Gervasi, who served as a former roadie for Anvil and was compelled to make a film about this object of his affection, to a heavy metal feel good story that attracted an exponential amount of new fans to a heritage band, Anvil founding members, vocalist/guitarist Steve “Lips” Kudlow and drummer Robb Reiner, have made sure that one thing remains constant. And that’s their dedication to their music.

While they continue to craft new, relevant and exciting hard rock music, it’s their history and their catalog that ensures Anvil’s firm and immovable place in the annals of metal history. Their status as legends is inarguable, even though they are still active as ever.

Overall, though, Anvil don’t have their own chapter in the heavy metal encyclopedia; they have their own volume, thanks to a rich, revered cannon that old fans continuously revisit, all the while attracting new fans to their lair with continued quality music. That’s how damn good Anvil are…
…And That’s precisely why The End Records, which also released the band’s fourteenth album Juggernaut of Justice earlier this year, is choosing to celebrate Anvil’s career with Monument of Metal: The Very Best of Anvil, a 19-track career retrospective that will earn “must own” and “must hear” status for fans both fans new and old.

This set collects choice cuts from Anvil’s career and the track listing was hand-selected by the members of Anvil and spans their three-decade career. It is designed to show you why the aforementioned likes of Guns ‘N Roses, Metallica, Motorhead, Anthrax, Slayer and more have praised Anvil as pioneers and way pavers in the heavy metal world. It’s a retrospective spanning the band’s entire iconic career and a comprehensive heavy metal history lesson captured on record.

“This compilation demonstrates the full diversities of the Anvil’s sound and feel, from the classics though the dark years to the current,” said rhythm keeper Reiner about the songs collected in this set. “These tracks are more to do with power and melody rather than just the speed aspect, although there relevant gems included here! We could endlessly compile Anvil tracks, as most are outstanding in their own rights. I feel this Monument of Metal makes a statement introducing Anvil to new pounders along satisfying the faithful.”

Lips concurred, saying, “This compilation is a great diverse collection of Anvil’s history. It’s a good retrospective of 30+ years of the creating and recording of Anvil’s music. These tracks are among some of our favorites.” He did admit that choosing songs was no easy task, since each of Anvil’s songs is a like a kid to him, saying, “Picking them was not easy as generally speaking we love everything we’ve ever done….otherwise we wouldn’t have recorded the music to begin with. This will serve as a great introduction to Anvil as well as make for great listening pleasure for our old diehard fans. Enjoyand stay heavy!!!