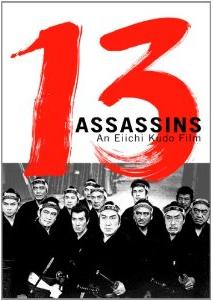 When it comes to 1963’s “13 Assassins”, I know this film is the original but I liked Takashi Miike’s 2010 adaption far more. Though, this black and white adaption is virtually bloodless tough it still manages to be semi-effective. The one aspect I had major trouble with was Animeigo’s subtitles. They chose the most annoying font and they continue to change the color with each person that speaks.  This is very distracting, especially with a black and white film.  Not sure if that was the best decision here.

The film’s story is about a group of top class assassins, who set out to remove Lord Naritsugu before he enters into a political position. The Lord does follow any rules and kills anyone that crosses his path. It is up to the 13 chosen assassins to bring him down before he reaches his destination.

The DVD is presented in widescreen with an aspect ratio of 2.35:1. It also only included a Japanese audio track with its Dolby Digital Stereo, no dub track. There are a few special features but nothing worth checking out. Included are Trailers, Program Notes, Cast & Crew Bios and Image Gallery. Overall if you are fan of samurai films, it is worth checking out but definitely not my favorite. I prefer the 2010 remake for sure.