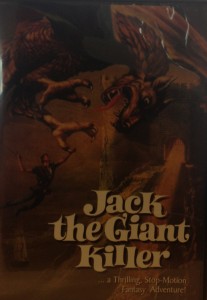 Legend Films is re-releasing the 1962 film “Jack and the Giant Killer” to capitalize on the release of Warner Bros recent film “Jack The Giant Slayer”. The DVD though is very unimpressive. The colors are extremely faded and the print looks a bit sad. Stop-motion animator Jim Danforth tried to recreate what Ray Harryhausen did with Nathan Juran’s “The Seventh Voyage of Sinbad” but falls short of his talent. I would recommend the Rifftrax version of this film, at least it’s worth the laugh, which is also released by Legend Films coincidentally.

Official Premise: Farm boy Jack heroically rescues Princess Elaine from sorcerer Pendragon by slaying his bloodthirsty giant. But when Pendragon uses his evil powers to bewitch and imprison Elaine in his enchanted fortress, Jack must cross the ocean to brave dragons, two-headed ogres and an army of ghouls to save his lady love!

Even though the film’s transfer has seen better days, I have heard that this film has two versions of it floating around. One of them is the original 1962 version and the other has musical numbers added in. At least this one is the original 1962 version, since I have heard that the musical version is even more unwatchable. There are no special features included here, which is not shocking as all since this is just a cash-in release. If you are a childhood fan of this film and have never owned it prior, it just comes down to your love of this film and if you have $8.99 to blow.