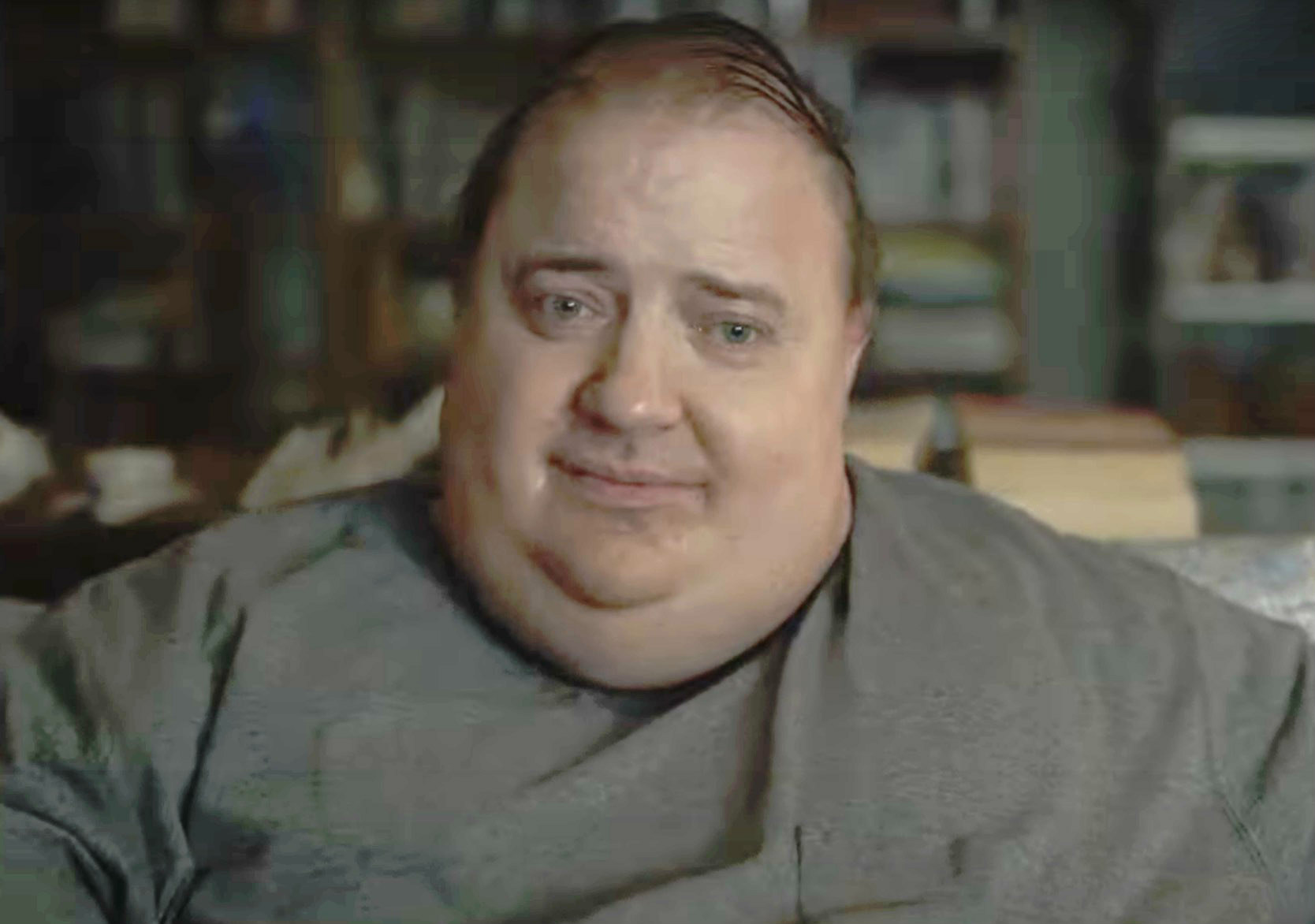 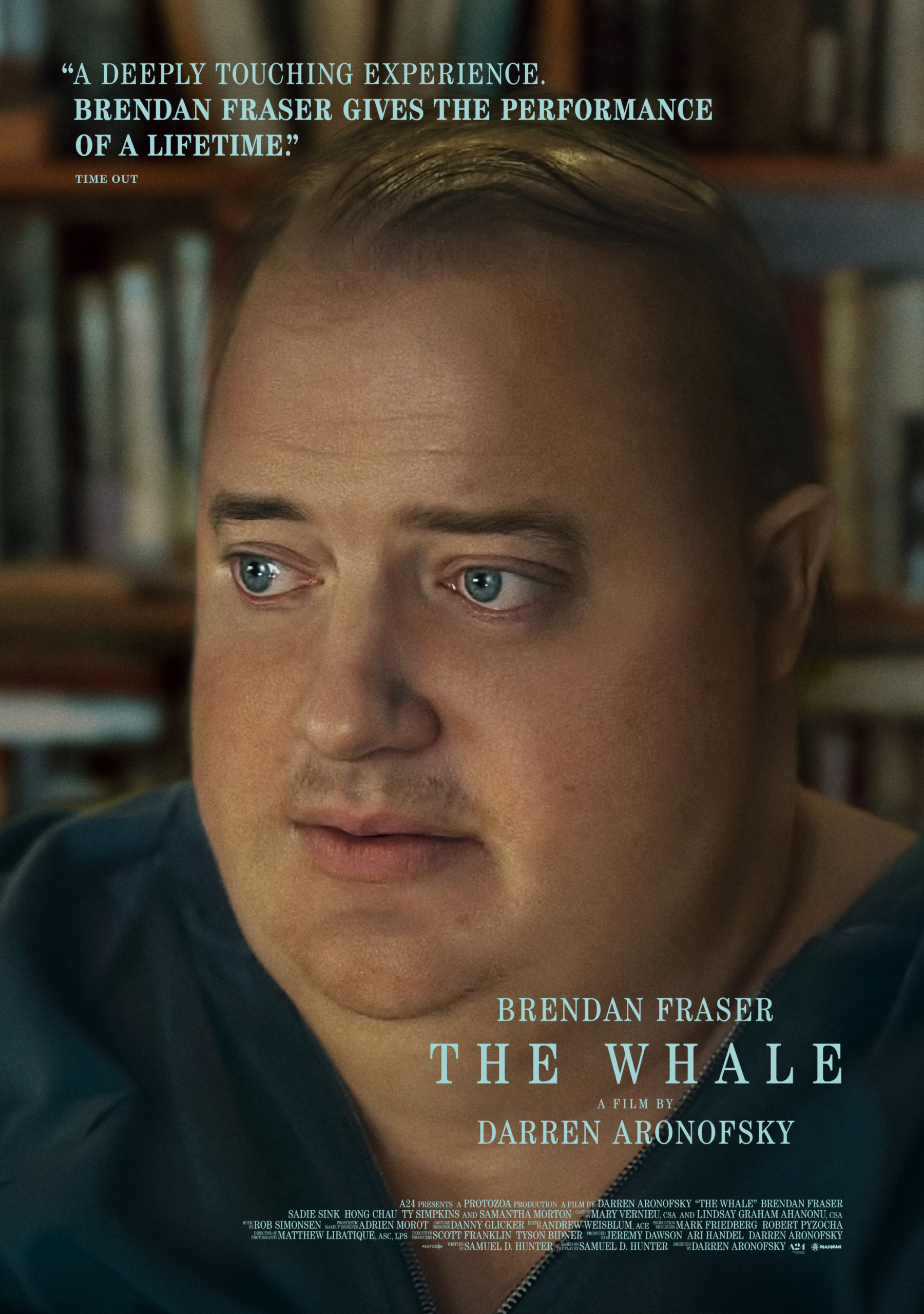 And the Oscar goes to…..  Brendan Fraser.  That is all.

OK, I’m getting a little bit ahead of myself here.

An online class is in progress.  The main screen is filled with the faces of all of the students.  The only black frame belongs to the instructor, who informs the others that the camera on his laptop is broken.  But it isn’t. He’s just afraid of being seen.

Driven by Brendan Fraser, who gives a performance that is both brilliant and emotional, “The Whale” tells the story of a man whose life has spiraled downward as his waistline has increased.  Charlie (Fraser) was once a happy man with a wife and daughter.  A college professor, he was able to share his love of literature and of writing.  But Charlie had a secret and that secret destroyed not only his life, but the lives of those that loved him.  Now it is only through food that Charlie can achieve any semblance of happiness, finding consolation in a bucket of chicken or a couple of giant meatball and cheese subs.  He is looked after by his friend, Liz (Chau), who drops by often offering dinner and some companionship.  Liz knows that Charlie is slowly killing himself, but he refuses to seek medical help.  Only after receiving a couple of unexpected visitors does Charlie begin to think of happiness.  But not for himself.

I’m a big guy.  I can always afford to lose a few pounds.  And I can admit here that I have had people refer to me as fat.  But I’m Audrey Hepburn compared to Charlie.  Usually, a large person is played for laughs on screen.  Think Eddie Murphy in “The Nutty Professor,” Martin Lawrence in “Big Momma’s House” or the final scene in “Dodgeball” where a very hefty Ben Stiller makes a self-depreciating joke and remarks to the audience, “Are you happy?  Fatty made a funny.”  But with “The Whale” you have no desire to laugh at Charlie.  You sympathize with him.  When he struggles to take a few steps, you feel his exhaustion.  And when he strains to pick something up off the floor, you can feel your fingers reaching out as well.  But Charlie doesn’t want your sympathy.  He just wants to be.

I have always been a fan of Brendan Fraser.  From “School Ties” to the “Mummy” series to the underappreciated baseball comedy “The Scout,” he has always appeared genuine on screen.  His performance here is no different.  You feel sad for Charlie.  Not because he’s heavy but because he’s a human being.  It doesn’t matter if Charlie weighs 400 pounds or a buck twenty-five, the hurt he feels is evident in his eyes.  And the ability to express such emotion with only a glance is the hallmark of a great actor.

Fraser is supported ably by his co-stars, including Ms. Chau, Sadie Sink as Charlie’s estranged daughter and Ty Simpkins as a man literally on a mission who knocks on Charlie’s door.  There is not a false performance in this film.

As a filmmaker, director Darren Aronofsky can be very hit or miss.  On one side of the spectrum, he created a masterpiece with “Requiem for a Dream.”  On the other hand, I give you “The Fountain.”  “The Whale” is another fine achievement and one that should be seen and appreciated.

5
Filed Under: Film Reviews Tagged With: