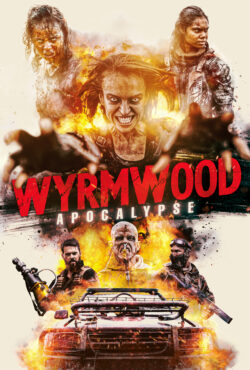 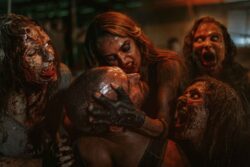 Unlike one of it’s clear influences, “Wyrmwood: Apocalypse” could care less if you haven’t seen 2014’s “Wyrmwood: Road of the Dead.” For the unaware, “Road of the Dead” was a “Mad Max” with zombies. But unlike “The Road Warrior,” Apocalypse keeps it’s foot on the gas and doesn’t bother reminding you who have the characters are. So as a refresher, in the world of “Wyrmwood,” zombie breath and blood are a fuel source for vehicles and other technological weaponry. It’s the kind of idea, at least on paper, that is absolutely stupid, but thanks to a gung-ho cast and plenty of zombie scenery chewing, it manages to become a modern B-movie worthy of any backwoods drive-in. But that’s “Road of the Dead,” how does its successor hold up?

Apocalypse” is about Rhys (McKenzie), an apocalyptic scavenger that bounty hunts the living and dead for his bosses, the evil remnants of the government’s military police. Rhys is handed a hefty bounty in the from of Brooke (Bianca Bradley), our zombie hybrid femme fatale from “Road of the Dead.” Brooke, we come to find out, killed Rhys’ brother making this bounty extra important for our lead. Lest I forget to explain, since the movie doesn’t, the zombie hybrids are able to tame their zombie side by drinking blood, which allows them a variety of odd zombie powers or, I guess you could say, powers that are made-up and needed when our heroes are in a predicament. Rhys has a bounty hunter’s change of heart when he encounters another hybrid, just like Brooke, by the name of Grace (Tasia Zalar).

The exposition, while thick and sometimes unnecessarily complicated in the first half of the film, is forgivable considering the richness of the film’s backdrop coupled with some spectacularly low-budget action sequences. For instance, Rhys home/compound feels like something you’d see in the video game “Fallout 4” while the ultimate battle between good and evil, the zombie hybrid alliance and the bloodthirsty military industrial complex, feels like Immortan Joe and Furiosa using Weyland-Yutani Corp. weaponry and science. If some of these pop-culture references are going over your head, you may not have as much fun as I did watching the final act bedlam of “Apocalypse” because writer/director Roache-Turner isn’t shy about his influences or leaning heavily into them.

“Apocalypse” feels nostalgic in the sense that it’s a mish-mash of 80s action, sci-fi and horror, all bathed in neon lights and shiny red gore.  If blood, guts, mayhem, carnage and the crunch of smashing vehicles is your thing, you’ll be smiling ear to ear during this. The world-building feels endless and lacking at the same time. Sometimes the small details are explained while the bigger details are glossed over, something I wish they flipped, but maybe that’s my own expectations for a sequel in general. That feeling doesn’t go away by the end, when it becomes obvious that “Apocalypse” may be the middle of an expected trilogy. Regardless of my nitpicks or hesitations, I’d be lying if I said I wouldn’t be the first in line for a third “Wyrmwood ” so that I can quench my own thirst for high octane vioelcne and apocalyptic theatrics by over-the-top characters.