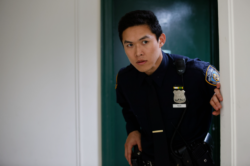 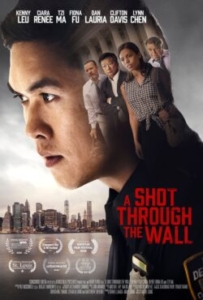 There are plenty of days where I feel like nuance is missing. I say that because we have so much content at our fingertips now, it’s hard to really dive into the meat of something. We need to get to the next piece of content to devour, so we look at the headline or photo and move on. Without diving too deep into the realm of politics “A Shot Through the Wall” still manages to do a very impressive job of reminding us that not everything is black and white.

Mike Tan (Leu), the son of two Chinese immigrants, is a fresh-faced street cop in New York City. Unfortunately for him, his white and also fresh-faced partner looks for trouble where it isn’t, spotting a few young African-American teens who “should be in school.” One of those teens flees, for reasons we don’t know and soon won’t care about. Tan, just a dozen steps behind the teen, ends up in an apartment complex, unholsters his gun, but accidentally fires off a shot under pressure. That one accidental gunshot enters an apartment, killing an African-American man and setting off a chain of events.

“A Shot Through the Wall” plays with a lot of unfortunate things that happen during officer-involved shootings. We see the immediate outrage from the public, even when all the facts aren’t in yet. We also see the cellphone footage that’s released of Officer Tan attempting to revive the man he accidentally shot. What the cellphone doesn’t capture, is everything that led up to that shooting, as well as everything after. Nonetheless, the cellphone footage captures only one part of the incident which still paints Officer Tan in a negative light. We also see accusations of racism and conspiratorial thinking along the lines of police cover-ups, as well as the threat of vigilantes looking for their own brand of justice. On the flip side, we do see how police attempt to smooth things over, through potential plea deals and PR campaigns. While all of this is interesting, that’s not what makes “A Shot Through the Wall” unique, because we’ve seen this before in other movies.

“A Shot Through the Wall” takes us through the emotional toll this takes on Tan, his family, his African-American fiancée and others. The movie does make a critical mistake in not showing us the emotional pain the actual victims family and friends are going through, but that may also be a creative choice on the end of Aimee Long in her first written and directed film. She’s not shy about showing some unmentionable truths, like the fact that Tan isn’t racist at all, but his parents are. Or the fact that Tan goes back and forth on whether or not to put his relationship on the line by publicly proclaiming, “I have a black girlfriend, so I can’t be a racist who shot an unarmed black man.”

In the end though, and throughout the movie, the audience has to wonder: Is Officer Tan innocent? It’s a tough call and the movie, to it’s credits, opts to let Officer Tan say if he is or isn’t himself before the credits roll. “A Shot Through the Wall” isn’t about red vs. blue, Black Lives Matter vs. Blue Lives Matter, or any of the usual nonsense that’s associated with officer-involved shootings nowadays. It’s about the pain of it all. For that, I’m grateful I watched “A Shot Through the Wall” because we sometimes need a reminder that we’re all humans on this random spinning globe and the only way to confront pain is head-on.