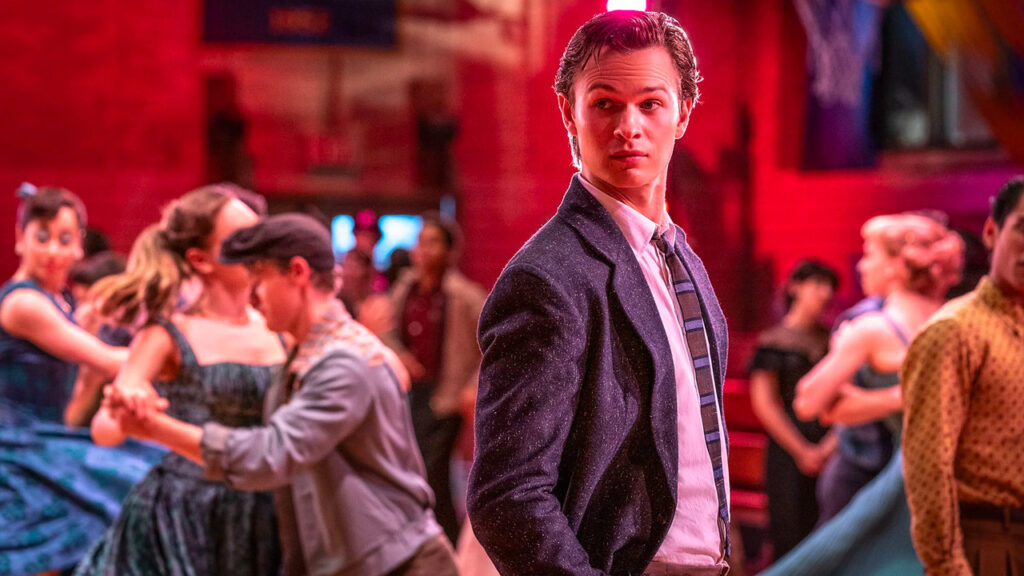 FULL DISCLOSURE:  I worship Steven Spielberg.  He made, in my opinion, the greatest film ever  – JAWS – and has produced so many favorites of mine that if I tried to make a list it would stretch longer than this review.  That beings said, when I learned he was putting his spin on “West Side Story,” a film that won 10 Academy Awards, including Best Picture, SIXTY YEARS AGO.  A film that was based on a show that was nominated for 6 Tony Awards, winning two (surprisingly, “The Music Man” was named Best Musical that year), I was a little confused.  Why, I wondered?  If he wanted to do a musical, why not give “Hamilton” a try?  When the first trailers for the new film were released, I saw nothing in them that made me think “this is going to be amazing.”  Mr. Spielberg, my sincere apologies sir.  This film IS amazing!

Inspired in part by Shakespeare’s “Romeo and Juliet,” the film tells the story of New York City in the late 1950s.  Immigrants are flocking to America in one particular neighborhood the local residents are not fond of their new Puerto Rican neighbors.  Two gangs – the Jets (white) and the Sharks (non-white) constantly battle for control of their “turf.”  Their’s is not a pretty neighborhood, with the ancient brownstone apartment buildings scheduled to be demolished to make way for new high-rises.

When tensions get too high, Riff (Mike Faist) tells the gang that he will challenge Bernardo (David Alvarez) to a rumble at the school dance being held that evening.  Also attending the dance that night are Tony (Elgort), co-founder of the Jets and Riff’s best friend and Maria (Zegler), Bernardo’s sister attending her first dance.  Sounds pretty innocent to me…what could possibly go wrong?

Faithful to the original film while also bringing the story to a new generation, ‘West Side Story” is a masterpiece of film making.  From an outstanding cast to the memorable music to the production design, this is a film to be seen on the biggest screen possible and taken in frame by frame.

Fans of the 1961 film will find the story a little darker than they remember.  Here Tony is on parole, having served a year in prison for almost beating a boy to death in a rumble.  The city is grimy and dusty and, with the exception of at the dance, the gang members wear threadbare and dirty clothes, a far cry from the pressed and pleated pants there wore previously.  Also, as expected, the Sharks and their associates speak a lot of Spanish, sans subtitles, though I found it easy to follow along with the conversations.

The cast, led by Elgort and Zegler, is out of this world.  Both are fine in the dramatic scenes and have a true chemistry when they get close.  And they both have excellent singing voices.  This can be said about the rest of the cast, with special mention of Mr. Faist, Ariana DuBose, who plays Anita, Bernardo’s girl and the immortal Rita Moreno.  Ms. Moreno won the Supporting Actress Oscar for “West Side Story” sixty-years ago and very well may do it again with her performance here.  The rest of the supporting cast is equally good and I want to put a spotlight on Iris Menas, who plays Anybody’s.  She doesn’t have a lot of screen time but she is the emotional heart of the film when she is on-screen.

The music is timeless, and even if you’ve never seen the original film you are certainly aware of the many songs the show and film made famous.  Sadly, lyricist Stephen Sondheim passed away a couple of weeks ago but his words will live on forever.  The choreography is well crafted, with the original ideas of Jerome Robbins being folded into a new, more frenetic style.

With a few weeks left in 2021, “West Side Story” is looking to be the best film of the year.