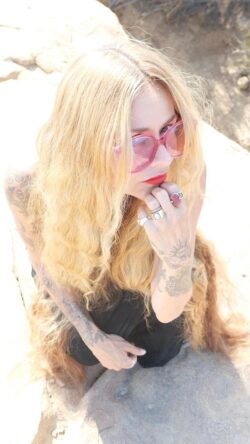 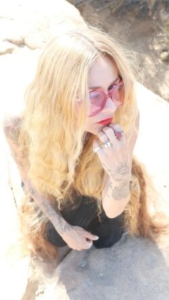 Chloe Trujillo is a visual artist, fashion designer and musician. Her latest solo release titled “Mothers of a New Nation” blends a variety of styles and influences some of which are pulled directly from her art works while others pay homage to her experiences as a young woman growing up around the world in places such as New York City, Paris, and Berlin. Media Mikes had the chance to speak with Chloe about the new album, what it was like working with veteran Producer Tommy Daughtery and how she balances her work on so many different projects.

Adam Lawton: Can you give us some background on the new album “Mothers of a New Nation”?

Chloe Trujillo: I started the writing of this album years ago. I am always writing and recording ideas. A lot of times I start by just recording them into my phone. Things started piling up as I wasn’t really doing anything with all these ideas. I always had this feeling of dependency on the need for a producer or engineer who knew how to use recording software. I could do some basic recording with Garage band but that was really it. I had been working on another project with an artist who introduced me to a producer by the name of Tommy D. I showed him the song “Light & Love” which was mostly finished but still needed some instrumentation and mixing. This was all just prior to the pandemic. Every week that I met with him we kept moving forward and sharing ideas. He helped me bring all of those to life and get them on Pro Tools. I had always been a little reluctant to use technology because I enjoy the physicality of all that and working on a computer was just not appealing to me. When the pandemic hit, and things were at a stand still I got to the point where I couldn’t take things not moving. I ended up getting a good microphone and recording interface and learned how to use logic pro which is the program I use now. The title of the album itself “Mothers of a New Nation” signifies in a way a new birth for me creative wise. I wrote an entire second album which I am holding on to for now. Learning all this has really sparked my creativity.

AL: Have you ever pulled musical inspiration from one of your art pieces or possibly an artwork idea from your music?

CT: Both ways totally! Most of the time when I paint, I have lyric ideas or melodies come to me. The same when I am working on music and I get a visual idea. The two work very much together in that a song can inspire a painting and a painting can inspire a song.

AL: With this being your second solo album were there certain things you wanted to accomplish that you maybe weren’t able to do on the first record?

CT: I usually let my creative flow lead me to where I am going. With the second record I wrote that’s not out yet which I am calling “Spell Book” I learned to do so much on my own that there is very little outside influence. On my very first album “Ivresse” I worked with a really nice producer who loved instruments. Every time I would go into the studio there were new instruments for me to try and I just recorded everything. That album has a gypsy vibe because of all that was added.

AL: Were you aware of Tommy Daughtery’s background prior to working with him?

CT: Yes, I was aware of his work, but I didn’t know what to expect. Tommy worked with Death Row Record artists like Tupac, Snoop Dogg, and NWA. He had all these great beats and I thought it ended up being a cool combination. I had a lot of fun working with Tommy. “Light and Love” was the first song I showed him, and I had written that with heavy bass and a hip-hop beat in mind. He took that and ran with it. 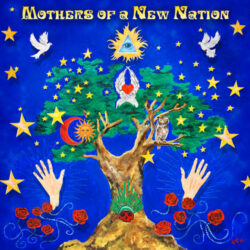 AL: Can you tell us about some of the musicians you were with on the album?

CT: I originally would have never asked my husband (Robert) in any way to help me out as we both are very busy and independent; however, He came in and recorded all the bass for me and had a great time doing so. It was cool to have him play on the record and he complimented some of the bass lines I had demoed. My son Tye played some guitar on a couple tracks as well which was great. Tommy D had suggestions to bring in other artists such as Chris Poland who I knew from Megadeth and OHM. Stephen Perkins (Jane’s Addiction) was another mutual friend who we had come in and do some drums on a few tracks. A lot of the time Tommy would be working on a track and there would be any number of artists coming through the studio and he would just ask them. Everyone was always more than happy and excited to help.

AL: Was it difficult balancing the role of artist along side Wife/Mom when working with Robert and Tye?

CT: It wasn’t that difficult really. We are all musicians or artists and everyone in our house is very creative and doing their own things. We have respect for each other and are independent. Tye has been a professional musician since he was 9 years old and we have always let him do his thing which came very naturally to him. It is the same with our daughter who is an awesome drummer. She is a little bit more shy but great. When I needed something, it wasn’t difficult to work with Tye and Robert. I would show them the usually badly played riff and they would take it from there. The only real trouble I had was actually asking for help. Robert is always very busy and at the time was doing stuff for Ozzy Osbourne, Infectious Grooves and of course Metallica so I didn’t want to bother him. I needed a bass player and knowing I had two amazing bassists at home rather than going to look for someone I finally asked for help. Robert and I did a lot of recording at night after the kids went to bed. I didn’t feel like the wife asking but more so the artist asking for a bassist. That’s just how we are with one another.

AL: Can you tell us about some of the other projects you have been working on lately?

CT: I have been working on a few different art shows for the Tracy Park Gallery who represents me. I just had some art appear at Art Basel in Miami. During a charity event last year, I met Mark Dalbeth from the band Bellusira and he and collaborated on a single titled “Mana”. We now are working on a couple EP’s and have plans for a full-length release as well. The name of the group is Chloe Trujillo and Rev Medic. I released an EP just prior to the pandemic with Dan Stein and Chris Westfall titled “What Are We” and the group is called Chloe Trujillo’s Mystery Ride. We all live near one another, so we just got together and worked on a bunch of ideas I had. That was a lot of fun. There is also a bunch of newly designed “Mothers of a New Nation” merch which is based off some of my artwork.