Singer, songwriter, guitarist, and Alice In Chains co-founder Jerry Cantrell today announces a North American tour beginning on
March 24, 2022 in support of his soon to be released album Brighten. Tickets are on sale Friday, August 27 at 10:00 AM local time.

The upcoming tour follows the release of his first song from Brighten, “Atone”, which was met with praise from fans and critics. Rolling Stone writer Jon Blistein said, “Atone” is a heavy track, although it’s undergirded by a sinister twang while the guitar riffs hit with grit and menace, as well as a bit of psychedelic unease. “Running out of time,” Cantrell wails right before the hook, “Gotta find a way to atone/Gotta find a way to atone/Trying to find a way to atone.”

Jerry’s expansive sonic palette incorporates everything from moments of moody organ and powerful pedal steel to the cathartic choruses and airtight riffs which is the hallmark of Cantrell’s sound.

The tour kicks off at the legendary First Avenue in Minneapolis and will wind its way across the country hitting major cities such as Chicago, Detroit, Nashville, NY, Philadelphia, Seattle and Los Angeles to name a few. See full tour routing below.

Tickets for the Brighten Tour are available via Ticketmaster and wherever tickets are sold. 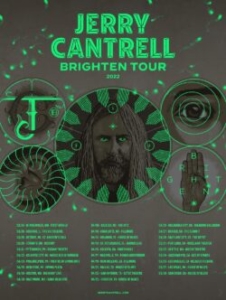