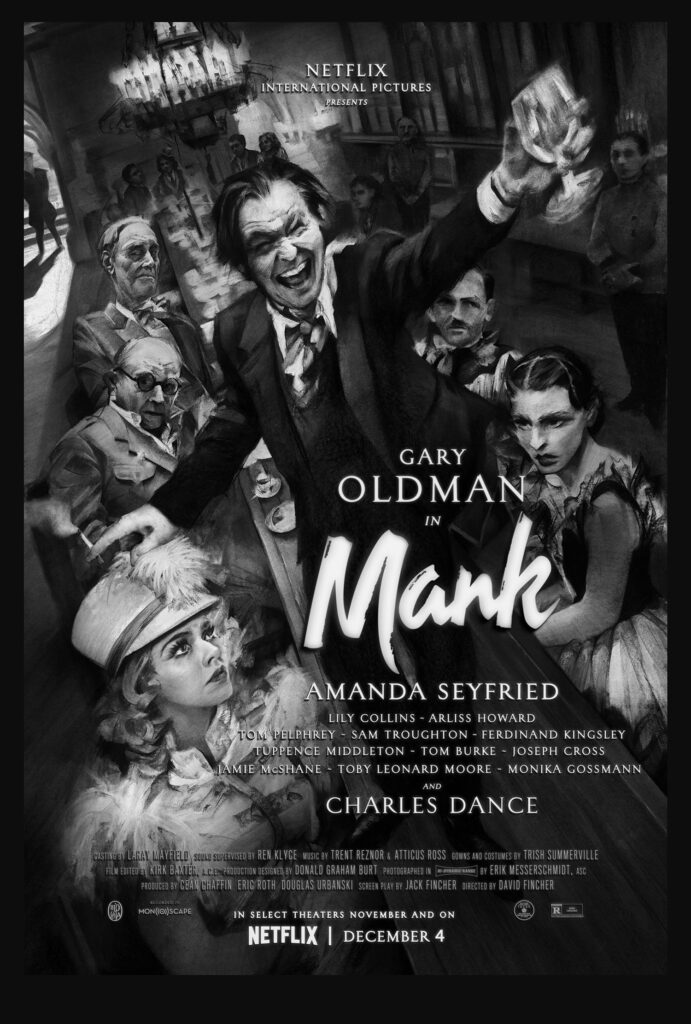 “Citizen Kane” is often regarded as the greatest film ever made.  Directed by “boy genius” Orson Welles, who was only 25 at the time, the film would receive nine Academy Award nominations, including Best Picture (Welles was also nominated as Best Director and Best Actor) the film won only one Oscar, Best Original Screenplay.  The award was given to Welles and Herman J. Mankiewicz but, according to “Mank,” only one of the deserved the award.

We meet Herman Mankiewicz (Oldman) as he is brought into a home far from the big city.  Mank, as he is called, is recovering from an auto accident and has been hired by Orson Welles to write a story about a man obsessed with power but yearning for love.  As Mank begins dictating his script, we look back at various episodes in his life that have made him the man he is.

A true love letter to the movies of the Golden Age of Hollywood, “Mank” is an amazing recreation of those exciting times before World War II when talking and conversation were almost a commodity.

Director Fincher, working from a screenplay by his late father, Jack, has captured everything about the films of that era, from the opening credits to the cue marks that appear in the corner of the screen to signify a reel change.  The script is well written (surprisingly this is Jack Fincher’s only produced screenplay) and the dialogue is pure poetry.

Mank is a man who loves his work, his liquor and his women, though not always in that order.  As he makes his way around Hollywood we are introduced to his fellow writers (Ben Hecht, S.J. Perelman and George S. Kaufman among them), Hollywood moguls like David O. Selznick, Irving Thalberg and Louis B. Mayer (an outstanding Arliss Howard, missing from the big screen for far too long).  We also meet the “boy genius” himself, but in this story Orson Welles (Tom Burke) is a secondary character, showing up occasionally to add his thoughts to Mank’s script.

Oldman is perfect as Mank, accenting every nuance in his many monologues, whether he is sober or…not so sober.  His performance is truly award worthy, and I have him neck and neck with Chadwick Boseman for this year’s Best Actor Oscar.

But the big revelation here is Amanda Seyfried, who plays actress Marion Davies.  I’ve seen her in everything from the “Mama Mia” films to “Ted 2” to “Les Miz” to the underseen “Lovelace,” in which she made Linda Lovelace into a human being and not just a punchline, and have always enjoyed her but this is the first time she has completely inhabited a character.  She has been nominated for a Best Supporting /Actress Oscar for her performance here and rightly so.

Production wise, the film is beautiful to look at, with much credit going to cinematographer Erik Messerschmidt, an Oscar nominee for this, his first film as DP.  His cameras capture the era perfectly and it’s like going back in time.

Most movies about the movies are either hit or miss.  “Mank” is definitely a hit.