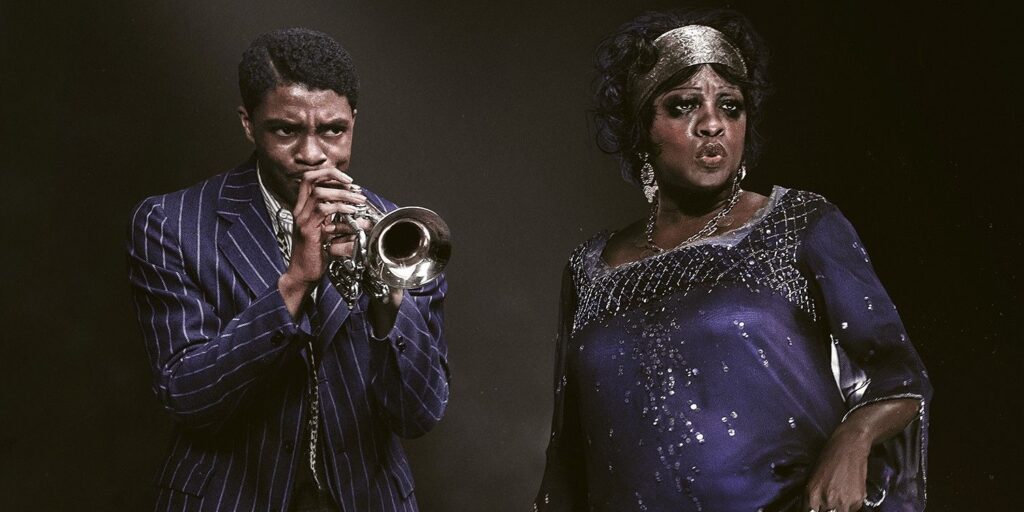 With the 93rd annual Academy Awards just days away, it is a good time to take a look at “Ma Rainey’s Black Bottom,” a film unforgivably snubbed in the Best Picture category. Garnering a total of five nominations, “Ma Rainey’s” is a fantastic drama with a brilliant cast punctuated by memorable performances from Viola Davis and the late Chadwick Boseman.

Based upon the 1982 stage play by the late American playwright August Wilson (1945-2005) and wonderfully directed by George C. Wolfe (2005’s “Lackawanna Blues”), “Ma Rainey’s” is set on a hot and steamy July day in 1927 Chicago. Popular Georgia-born blues singer Gertrude “Ma” Rainey (Davis) is scheduled to record a song – “Ma Rainey’s Black Bottom” – for a pair of white producers anxious to make a profit off her music.

Ahead of her much-anticipated arrival, Ma’s band arrives to prepare for the day’s recording session. Her musical quartet is made up of three seasoned veterans (Colman Domingo, Glynn Turman and Michael Potts) and an ambitious trumpet player named Levee Green (Boseman). Levee has a head full of dreams of becoming a star on his own, but his fellow players scoff at his ideas, at least until he tells them in a powerful scene about a disturbing racist experience he had while growing up.

When Ma (Davis) arrives late there is heavy tension in the air, especially when it comes to her interaction with one of the white producers, Mel (Jonny Coyne, “The Blacklist”). Neither likes the other as Ma does not take any guff from anyone and Mel does not like her because she is black. In the middle is the other producer, Irvin (Jeremy Shamos, “Better Call Saul”) who will do anything to appease her. After many hiccups, the recording session finally begins but it is afterwards when the story’s haunting climax occurs.

The real Ma Rainey lived from 1886-1939 and is often regarded as the “Mother of the Blues.” The Columbus, Georgia native was a force of nature in life and Davis drives this home with a tour de force performance that dominates the silver screen. It’s almost no wonder that Davis thrives so well on the script since she won an Oscar for Best Supporting Actress in 2016’s “Fences,” another of Wilson’s works.

Equally spellbinding to watch is Boseman whose last performance before his untimely passing is one never to be forgotten. His progression from a bravado-filled, star-seeking musician to a broken man seething with rage, pain, and frustration is done with amazing skill. It is arguably the best acting of his brief career and makes his death that much more tragic.

Overall, “Ma Rainey’s” is an important, transformative work of cinema. How it was ignored in the Best Picture category is a travesty of the highest order.