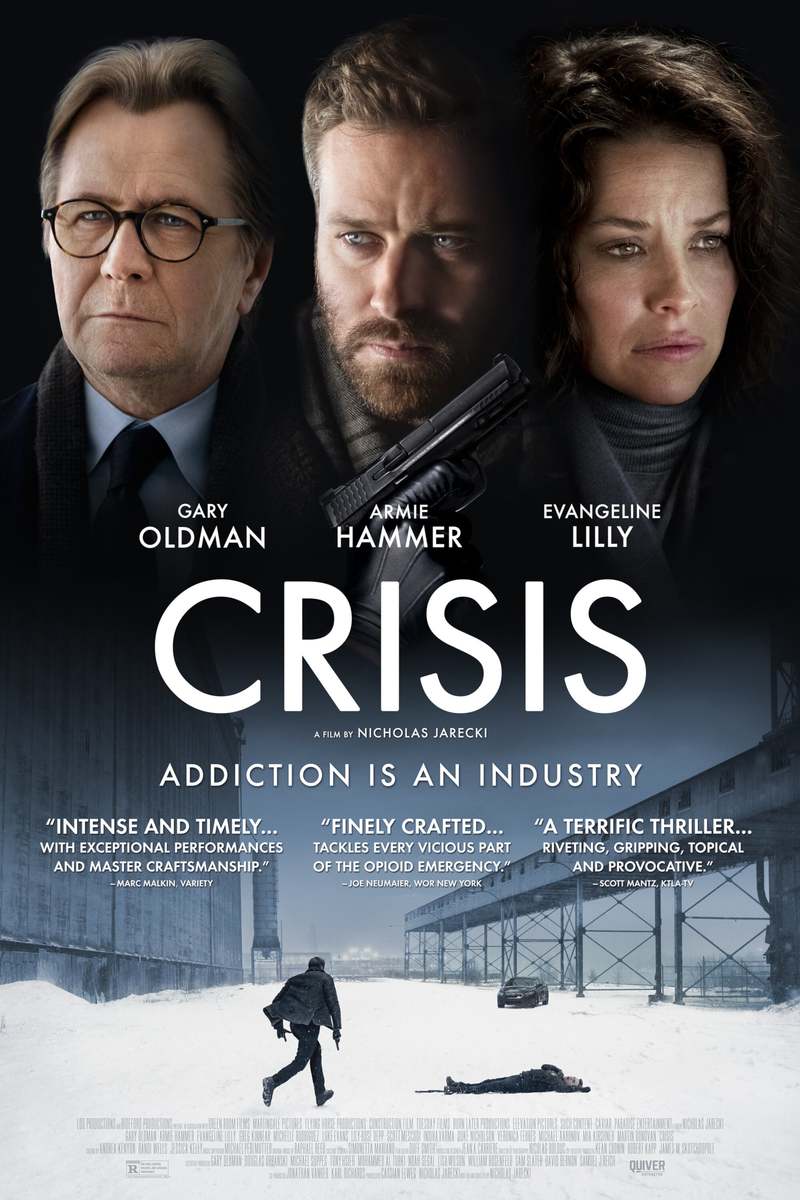 Even with the current pandemic circling around the globe, it isn’t alone in its destructive hold on the world.  You would have to be living on Mars to not be aware of the horrible Opioid problem that is still being faced by over 10 million people in the United States alone and is claiming the lives of almost 50,000 annually.  You would be correct in calling it a Crisis.

“Crisis” is the story of three very different people with very similar goals.  The film opens with a young man running for his life through a field of snow.  He is heading to America from Canada but is eventually stopped by the Border Patrol.  In his backpack they find $500,000 worth of Fentanyl.  Meanwhile, in nearby Montreal, Jake (Hammer) is setting up a deal with Mother (Guy Madon).  He and his Armenian partners are looking to score $3 million in Fentanyl, to be pressed into, and disguised as, vitamin pills.

Meanwhile, at a small college, Dr. Tyrone Brower is pushing back against recommending a drug created to stop pain but is described as being non-addictive.  Dr. Brower’s lab results tell him different but the school’s Dean (Greg Kinnear) urges him not to make waves as the pharmaceutical company manufacturing the drug are his biggest grant donors.

In Detroit, a mother’s worse nightmare come true when she is informed that her son has overdosed after consuming a handful of Oxycodone.  Grief stricken, the woman (Lilly) makes it her goal to find out where her son got the pills.  Eventually all three characters will be central to the story.

Well-paced by director and writer Nicholas Jarecki, who also has a role in the film, “Crisis” is a film with several twists and turns, each one taking your around the corner to another revelation.

Oldman, who is truly a chameleon on screen (he’s played everyone from a wannabe Rasta pimp in “True Romance” to Lee Harvey Oswald in “JFK” to Winston Churchill in “Darkest Hour,” which won him the Academy Award for Best Actor).  Lilly is spot-on as the grieving mother who will do anything to find the answers she is looking for.

Hammer’s Jake is the most complex character.  As his story unfolds we learn he really isn’t who we thought he was.  We also learn that he has a sister who is hooked on drugs, which gives his character more impetus to carry out his plans.

The plot, based on a true story, jumps from one character to another fairly seamlessly, which is always a positive in a film with multiple story arcs.  If I had any complaints it would be Lilly turning into a one-woman detective squad and the fact that Mother sometimes loses his Canadian accent, curious because Mr. Madon is, indeed, Canadian.

Those little quibbles aside, “Crisis” is an enjoyable film and well recommended.  It also is proof, in this writer’s opinion, that they can’t sign Armie Hammer fast enough to play Batman!