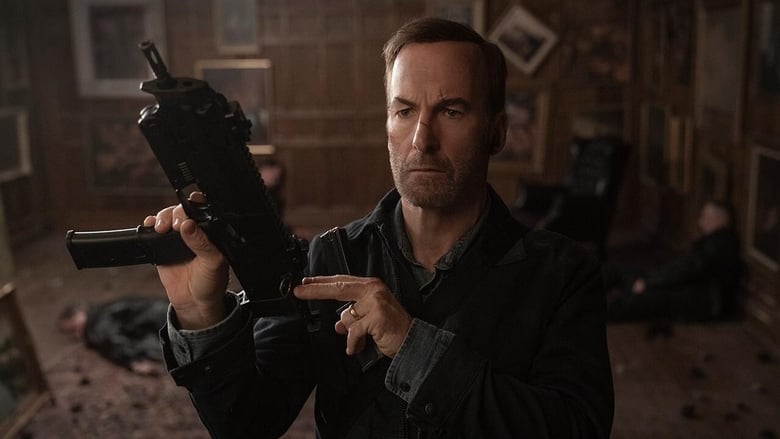 A handcuffed man, his face badly bruised, sits across a table from two detectives.  They stare as he takes a can of cat food out of his pocket, then opens it.  They stare more as he pulls a kitten out of his jacket.  “Who are you,” they ask?

Hutch Mansell (Odenkirk) leads a pretty dull life.  Wake up.  Make breakfast. Jog. Catch the bus.  Go to work.  Come home.  Repeat.  The same dull life, day after day after day.  Until the day he hears a noise downstairs in the middle of the night.  He comes across a pair of burglars, who confront him.  Suddenly his teenage son tackles one of the baddies and Hutch has the opportunity to take out the other.  Instead he lets them go, drawing the ridicule of everyone from his neighbor to the cop that takes the report.  He catches more hell at work from his boss – also his father-in-law – (Michael Ironside) and his brother-in-law (Billy MacLellan).  He remains un-phased until his daughter notes that her kitty-cat bracelet is missing, innocently commenting that it must have been stolen.  This comment, despite the innocence in its mention, triggers something in Hutch, who heads out on a mission.  And what a mission it is.

Action-packed from beginning to end, “Nobody” is a true cousin to films like “Death Wish” (the Bronson one, not the horrible Bruce Willis remake) and “Straw Dogs.”  A film about a seemingly mild-mannered man who reaches his breaking point.  Only Mitch is much deadlier because he has a past.  An amazing past that puts him square on the top of the “People You Should Never Mess With” list.

Odenkirk, probably best known as Saul Goodman in the acclaimed series “Better Call Saul,” is a revelation here.  I’ve been a fan since he appeared with David Cross in “Mr Show with Bob and David” and have enjoyed his supporting work in films like “The Post” and “Nebraska” proves himself a capable leading man.  His is a character you keep learning things about, slowly understand how (and why) he is able to do what he does.  The supporting cast is also very good, including Nielsen as Hutch’s somehow understanding wife, Aleksey Serebryakov as a Russian mobster and the always entertaining Christopher Lloyd as Hutch’s father, who apparently has passed down some of the family skills.

The film is perfectly paced – no slow spots and plenty of amazing action, all set to some great tunes that set the tone of the on-screen action.

One Reply to “Film Review: “Nobody””