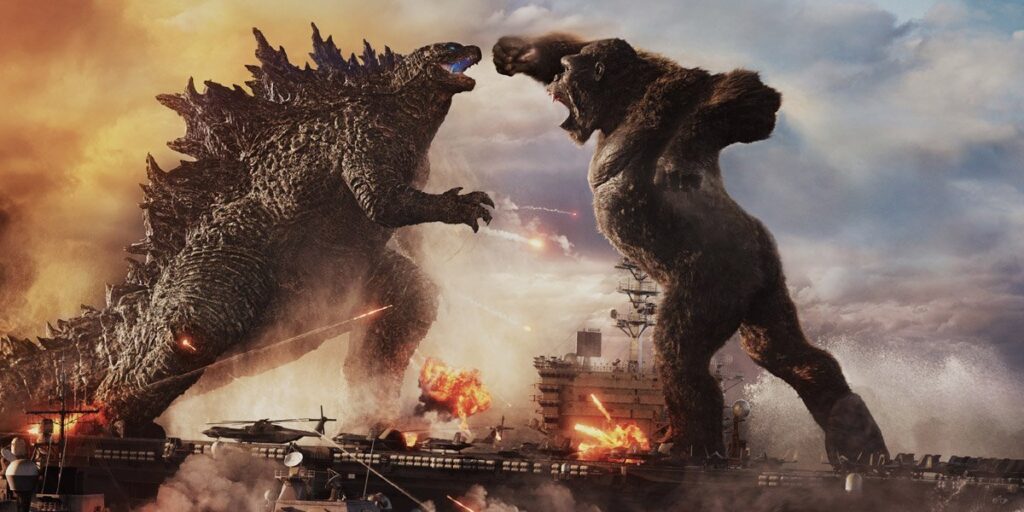 It’s March.  Do you have your brackets ready?  Who are you picking?  Rodan?  Mothra?  Typhon?  How about King Ghidorah?  With a name like that, how can he lose?  Quite easily it turns out.

Off the coast of Florida an unusual creature emerges from the ocean.  It’s our old pal Godzilla and he’s pretty pissed.  As CNN reports the news, they question what turned this once “friendly” monster into a…well…MONSTER?

Meanwhile, on Skull Island, King Kong is just minding his own business when he suddenly finds himself captured and flat on his back on a barge on the ocean.  Destination?  I’m not telling.

Short on story but HUGE on special effects, “Godzilla vs Kong” is a perfect example of the mindless entertainment we need right now.  Sure, Skarsgard, Millie Bobby Brown and Kyle Chandler – who must really enjoying working with Mr. Kong since he also starred in Peter Jackson’s epic 2005 King Kong” – emote in all the right ways but come on, you came for the Titans!!

As the two title characters make their way towards the inevitable battle, they have some fun along the way, destroying cities and battling other badies.  Millions (conservative estimate) of innocent people are killed as entire city blocks full of apartment buildings are knocked over like dominoes.  But you don’t care about them – you cheer every punch and laser=breath blast, clearly taking sides in the Fight of the Century!

The film is well paced and the visual effects are amazing.  I just watched the original 1933 “King Kong” the other night and the effects here make the early stop-motion effects used in that film look like…well…early stop- motion effects.  The effects come courtesy of Peter Jackson’s WETA shop and are so clean you can count every hair on Kong’s back as the wind blows through it and every scale on Godzilla’s rather large body.

Sure, you could stay home this weekend and watch the basketball Final Four, or you can treat yourself to the Ultimate March Madness and see “Godzilla vs Kong!”