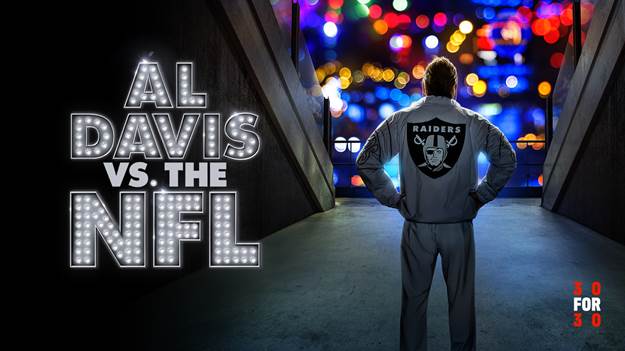 I had only been in Baltimore about a year when it was announced that the NFL”s Baltimore Colts would be moving to Indianapolis. The mood in the city was like a close friend had died. But teams moving was really nothing new in 1984. I grew up in Tampa and I still own t-shirts for the Tampa Bay Giants and the Tampa Bay White Sox, two teams that held their cities ransom with a threat to move in order to get new stadiums built.

In 1980 the Los Angeles Rams moved from L.A. to Anaheim (since then they’ve moved to St. Louis and back to L.A.). Seeing Los Angeles as a prime place to have a team, Oakland Raider managing partner /Al Davis decided to move his team to the empty Los Angeles Coliseum, with the promise of upgraded facilities and, of course, more money. But it wasn’t easy.

Entertaining and informative, “Al Davis vs the NFL” is another feather in the ESPN 30 for 30 cap. The film introduces both Pete Rozelle, who would become NFL commissioner and Davis, who helped found the American Football League (AFL) and soon became the managing partner of the Oakland football team. We see Rozelle in 1963 refusing to comment on a possible merger with the upstart AFL (it happened in 1966) and Davis’ team always running into bad luck, especially against the mighty Pittsburgh Steelers. Glory comes so close for the silver and black, only to be dashed away by Franco Harris’ “Immaculate” Reception one year, and a field of solid ice two years later. Now Davis and Rozelle go head to head in Federal Court to decide where the Raiders will play next.

Told through archival footage, and narrated by reenactors, The film is an amazing look back at a much simpler time in sports. Though quite popular in the mid-1980s, football did not have the amazing impact it has now. As “Just Win, Baby” becomes the phrase of champions, we learn how simple animosity between two men led to a landmark legal decision. We are also reminded of some of the great sportscasters of that decade, including Howard Cosell, Phyllis George, and Curt Gowdy. The legal battle is fun to watch, as neither Rozelle nor Davis want to be the first to throw in the towel.

Of course, if you follow football you know that soon the Browns went to Baltimore and became the Ravens and the Oilers left Houston for Tennessee. Meanwhile, the Raiders returned to Oakland and then, this year, began -playing in their new home city of Las Vegas. You’ve heard the saying “you can’t tell the players without a scorecard?” Well, these days, you can’t tell the NFL without an Atlas!

Just in time for the Super Bowl (go Chiefs!), “Al Davis vs the NFL” airs on ESPN this Thursday, February 4. It will also run on ESPN+ after the broadcast.