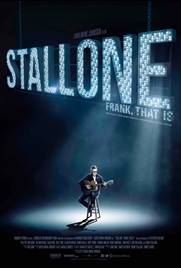 I love me some Frank Stallone.

I was first introduced to his music when his group, Valentine, appeared as the street-corner singers in the Academy Award winning film “Rocky.”  I played the soundtrack album to death and one of my favorite tracks is Stallone’s song “Take You Back.”  He also contributed to and performed several songs for the film “Staying Alive,” including the top 10 hit “Far From Over,” which earned him Grammy and Golden Globe nominations for best motion picture song.  Criminally it was NOT nominated for an Oscar, the category that year being overtaken with songs from “Flashdance” and “Yentl.”

As an actor, Stallone has turned in fine work in films like “Barfly,” “Hudson Hawk” (a guilty pleasure of mine) and “Tombstone” (he is the card player that accuses Doc Holiday of cheating early on in the film).  With all of these achievements you’d think he would be a household name like his brother, Sylvester.  Unfortunately despite his talents, that is one shadow he has never been able to escape.  Until now.  Ladies and gentlemen, please welcome…Frank Stallone.

This entertaining documentary begins with Frank Stallone in the next phase of his career…doing big band songs.  Dressed to the nines, and sporting a pair of Frank Sinatra’s cuff links, he takes the stage to great applause.  He is in fine voice and the crowd loves him.  We learn that he always had a love for music and, when he caught Elvis Presley on television, vowed to make it his career.

Growing up in Philadelphia he played in a couple of different bands.  He then formed Valentine, a band with several different line-ups (the third version is the one that appeared in “Rocky.”)  Along the way he worked with both Darryl Hall and John Oates, who played guitar in Valentine 2.  In a conversation with Oates we learn that, after he left the band he hooked up with Hall.

Having a song in the most popular film of 1976 should have been a ticket for musical stardom for Stallone and his group.  Unfortunately, when the band had a gig it was often introduced as “Frank Stallone and Valentine,” much to Stallone’s chagrin.  The shadow of his movie star brother followed Frank as a solo artist, with newspaper ads touting him as “Sylvester Stallone’s Brother, Frank.”  One club announced his appearance by simply noting that “Rocky’s Brother” was playing.

But it isn’t just music that Stallone does well.  We learn he is also an accomplished boxer and, as I noted, a fine actor.  Unlike some “actors” who only get cast because they have more famous family members – I’m looking at YOU, Joey Travolta.  You too, Don Swayze – Stallone never used his brother as a stepping stone.  In fact, sometimes the name was a curse.

As the film progresses we are treated to a bevy of Frank’s friends, touting his talents.  Among them are big brother /Sly, Billy Dee Williams, Arnold Schwarzenegger, Talia Shire – who can understand Frank’s frustration at being known as someone’s brother (her maiden name is Coppola, as in Francis Ford, and she wanted to be judged on her talents, not get a job because of who her brother is) and Steven Bauer.  Attesting to his musical talents you have such musical icons as Bon Jovi guitarist Richie Sambora, Guns and Roses bassist Duff McKagen and the ever-young Frankie Avalon.

If you’re looking for a film in which the underdog keeps fighting, and you’ve already seen “Rocky” a hundred times, I hope you give “Stallone: Frank That Is” a look.