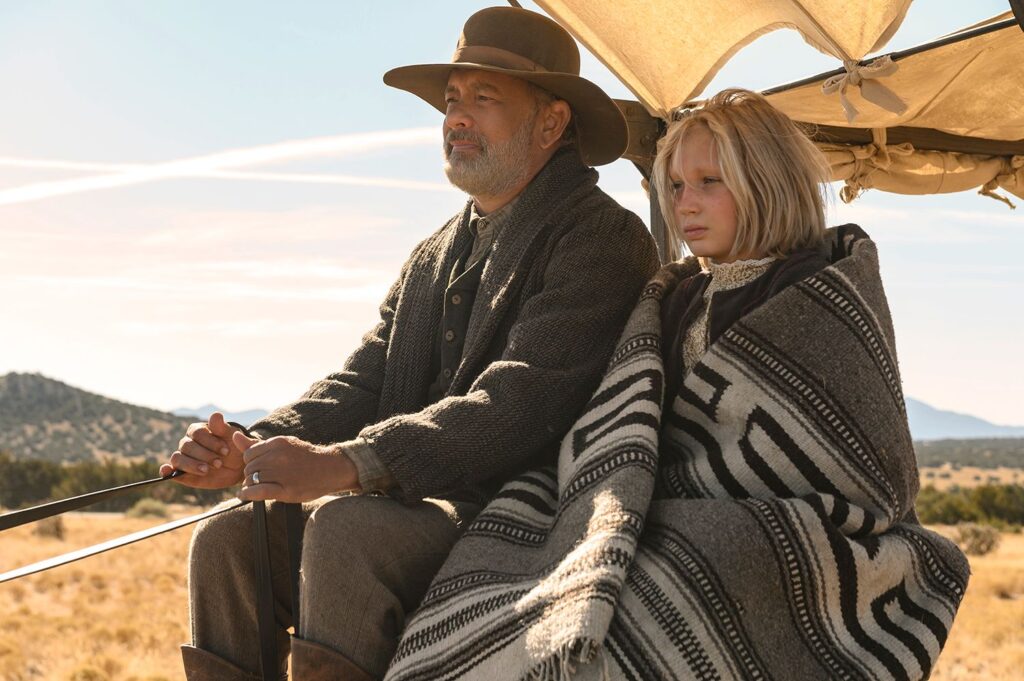 News is everywhere today.  Back in my day, you needed to watch television to learn what was happening, both locally and around the world.  Or subscribe to a newspaper.  Today there are 24 hour television news networks, Facebook, Twitter and all other assortments of way to get the word out.  So imagine having to gather in a darkened room, pay ten-cents and have someone read you the news.  If you can then allow me to introduce you to Captain Jefferson Kyle Kidd.

Now that the Civil War has ended, Captain Kidd (Hanks, outstanding as usual) earns his living traveling the country on horseback, picking up newspapers along the way.  He is known as a “News Reader,” and his choice of stories, and the way he tells them, earn him a decent living.  It’s 1870 and tonight we find him in the town of West Falls, Texas preparing for an evening of reading.  As he continues on his travels he comes across a young girl named Johanna (Zendel) who had been raised by Kiowa Indians but is now being sent to live with her remaining living relatives (her parents having been killed). Kidd takes her to the local settlement but is told by the authorities that he can either wait with her for three months – when the necessary people are scheduled to arrive – or take her to her family himself.  She is now his responsibility.  Determined to reunite her with her relatives, Kidd sets out with Johanna into the wild Texas wilderness.

Though well-paced, “News of the World” is not the type of film I expected from Paul Greengrass, whose amazing action work includes three “Bourne” films, “Captain Phillips” and the heart-wrenching “United 93,” which earned him an Academy Award nomination as Best Director.  Along the way to San Antonio (where Johanna’s relatives have settled) the pair run into all kinds of problems, including a band of no-goods who at first try to buy Johanna then decide to take her with violence. But Captain Kidd is a sharp guy – and a hell of a good shot.  As the film progresses, Kidd and Johanna form a bond.  He is protective of her as a father would be and she does her best to help him with his business, imploring those interested in Kidd’s news service to ante up a dime.

Hanks is his usual excellent self, seemingly able to inhabit any character he plays, much like Jimmy Stewart did in his career.  Ms. Zendel is equally outstanding.  Already the youngest actress (she is currently 12 years old) in history to win the Lola for “Best Performance by an Actress in a Leading Role” at the German Film Awards for her performance in 2019’s “System Crasher,” her inability to speak English only intensifies her work as most of her communication is done through body language and with her eyes.  It’s plain to see that Johanna has seen plenty in her young life and Ms. Zendel lets you see it on screen.

The film is beautifully photographed, with much credit due to Cinematographer Dariusz Wolski (“Sweeney Todd,” “The Martian”).  He shoots the Texas landscape beautifully and a scene where Kidd and Johanna are caught in a sandstorm is breathtaking.

If you’ve ever said to yourself, “I wish Tom Hanks would do a Western – and the “Toy Story” films don’t count – your wish has been granted.  Think of “News of the World” as an early Christmas present.