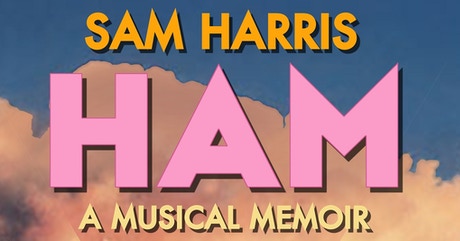 Now that there are 10,000 television channels to choose from, it seems like every one of them have a talent contest program.  “American Idol.”  “So You Think You Can Dance?” “Masked Singer.’  “Masked Dancer.”  ‘So You Think Your Monkey Can Sing?” (coming to the Animal Planet, probably sooner than we think).  But the one that really started it all was an early 1980s program called “Star Search.”  “Star Search” ran for fourteen seasons (13 in the 80s-90s and one in 2003) and introduced the world to such talented performers as Brad Garrett, the band Sawyer Brown, Billy Porter (more on him later), Adam Sandler, Alanis Morisette, Sinbad, Britney Spears and Sutton Foster.  But the best and the brightest to come out of “Star Search” was first season Grand Champion Sam Harris.  After his big win, it was all fame and fortune and success.  Right?

A filmed version of Harris’ award winning off-Broadway show, “HAM: A Musical Memoir” is an entertaining – and deeply moving – look at the life of a boy with a dream and the sacrifices he had to make to keep that dream alive.  Still looking youthful at age 59, Harris takes the stage, accompanied on piano (and in banter) by Todd Schroeder.  We learn that the showbiz bug bit Harris at an early age – 3 ½ – and his early days were happy.  His father was an athletics coach and, when he tried out for Little League and was offered the position of team water boy he realized he was “different.”

A job at Opryland in Tennessee at age 16 released him from the bonds of his Oklahoma home.  It also introduced him to, as Harris calls it, “the Summer of Scott.”  With his dreams still in his sight, Harris heads to California, where he performs in night clubs – sometimes to an empty audience.  Harris talks about his audition for “Star Search” and how he was originally rejected.  He emphasizes these stories with several musical numbers, from familiar show tunes to original songs written by Harris and Schroeder.

But it’s not all music and laughter.  In the most emotional part of the film, Harris explains the emptiness in his young life, how he felt he had not lived up to his father’s dreams for him and how he decided to take his life.  He does not succeed, obviously, but the scars from the incident, and so many more from his life, are evident in his heartbreaking delivery.

I have seen Harris a few times in concert and had the amazing opportunity to catch an early preview of “Grease” before it went to Broadway, which starred Harris as Doody and Billy Porter (told you he’d be back) as Teen Angel. (The show also featured a very miscast Rosie O’Donnell and a very young Megan Mullally, who would go on to star on “Will & Grace,”).  The fourth number in the show is “Those Magic Changes,” which Harris performed.  He brought the house down.  I remember turning to my friend when the applause died down and commenting “well, that’s the show-stopper!”  And it was, though Porter’s “Beauty School Dropout” was a close second.  We had been invited to the cast party after the show and I was able to chat with most of the cast – even got a few to sign my CD of the show (already recorded).  It was a great night and one I still think of, even though I went home with a massive crush on Susan Wood, who played Sandy!

Performed on an almost empty stage (there’s a bench and few props), “HAM” succeeds on Harris’ genuine and unvarnished look at his life, warts and all.  If you are a fan of Harris – as I am – this is a film for you.  If you aren’t familiar with him, I recommend you give it a look.  Not only for the music and laughs, but for the honesty Harris shares.