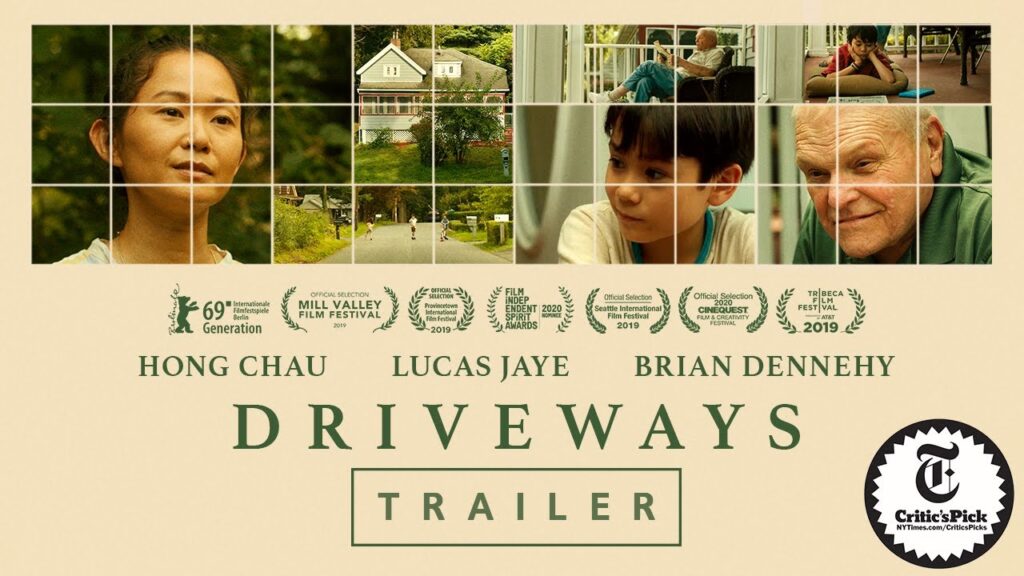 The late Brian Dennehy, who passed away in April of this year at the age of 81, was a versatile actor perhaps best known for his interpretations of Eugene O’Neill’s works onstage, for which he received two Tony Awards (“Death of a Salesman” in 1999 and “Long Day’s Journey into Night” in 2003). Of course, he also had a prodigious film career that included such titles as “Silverado,” “Cocoon” and “Rambo: First Blood.” Dennehy continued to pursue his acting craft even through last year, which allows us the gift to witness his prowess a few more times posthumously. One of these titles is the drama “Driveways,” a wonderful, sweet little drama in which Dennehy shines in a supporting role as a Korean War veteran who befriends an 8-year-old boy.

Kathy (Hong Chau, “Watchmen” TV mini-series), a single mom from Michigan, has driven to a sleepy little New York town with her 8-year-old son, Cody (Lucas Jaye, “The Sleepover”) to settle the affairs of her recently deceased and estranged older sister. It is a shock to the system for Kathy when she discovers that her sister was a hoarder, which means an overwhelming amount of cleanup she must do by herself before she can put it on the market.

Amidst his mom’s cleaning, Cody, a shy boy with a vomiting problem when placed in stressful situations, encounters the next-door neighbor, Del (Dennehy), a widowed Korean War veteran who is several degrees nicer than Clint Eastwood’s grizzled veteran in “Gran Torino.” A charming friendship begins to develop between them, probably the first one Cody has ever had, and it brings some happiness to Del’s often lonely world.

Days turn into weeks as Kathy struggles to not only get her sister’s house ready, but also trying to be the best parent she can be for Cody, whose father could care less. In that way, Del becomes a grandfatherly/fatherly figure for Cody while the boy becomes a mirror for Del to realize the regrets he has regarding his deceased wife and his only child.

With a couple of unimaginative character stereotypes mixed in, “Driveways” has a rather slow beginning, and it takes a while to really sink its hooks into us. Once it does, though, it becomes a touching, bittersweet drama. Kathy turns into a heroic character thanks to the toughness that Chau infuses into her and Cody, played with an innocent charisma by Jaye, is easy to root for. However, the greatest triumph of “Driveways” is Dennehy’s performance. While the director overdoes it with too many scenes of Del eating in silence in his kitchen (he is lonely, we get it), Dennehy delivers his lines with the ease of an expert craftsman. Even in moments of silence, Dennehy conveys to us tangible emotions. It is a supporting performance that lays the bedrock for this story and should be recognized with an Oscar nod.