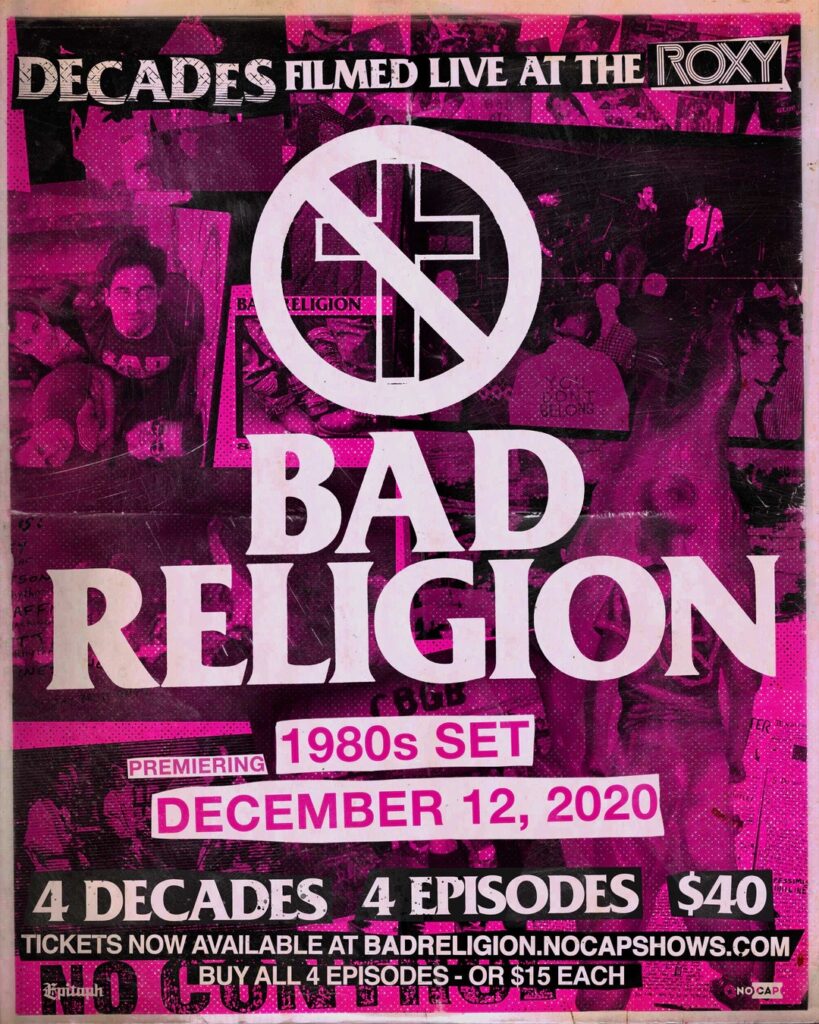 Punk veterans Bad Religion kicked off their “Decades” concert series on Saturday December 12th live from the famous Roxy Theater located in West Hollywood. The first of four online streaming concerts to celebrate the bands forty years of making music will feature full sets from four different decades of the bands career (80’s, 90’s, 2000’s, 2010’s). Newly record live performances combined with exclusive interviews and behind the scenes access give fans an immersive experience which they can enjoy from the safety of their own homes.

With live performances on hold for the foreseeable future streaming events has quickly become the new “normal” for bands to connect with audiences during the on-going Pandemic caused by COVID-19. Bad Religion is the latest group to join in and the band has nailed it right out of the gate! “Decades- 1980’s” took viewers back to the bands humble beginnings and featured a robust 21 song set list made up of songs pulled from the bands first 4 releases. (“How Could Hell Be Any Worse”, “Into The Unknown”, “Suffer” and “No Control”) In between staple BR songs like “No Control”, “Give You Nothing” and “You” viewers were treated to lesser played songs like “Latch Key Kids” and “In The Night” both of which have been absent from live shows for more than 10 years. Also featured in the set was the song “The Dichotomy” from the bands second release “Into the Unknown” an album initially not well received by fans due to its drastic stylistic shift, The band started performing this song live during the 2019 “Age of Unreason” tour and it was great to see it included as it certainly a part of the bands history. Mixed in between the live performances are behind the scenes footage and insightful interviews with the members talking about different experiences from the decade. This really added to the overall presentation and gave the show a nice flow. If that wasn’t enough the band was actually present and interacting with fans via a live chat which occurred throughout the entire show. How cool is that!?

Though the show clocked in at just under 60 minutes the overall look and impressive sound more than made up for the shorter runtime. Bad Religion has laid a solid foundation while not only setting the bar extremely high for the remaining three concerts. We highly recommend you check them out!

21. Fuck Armageddon… This is Hell