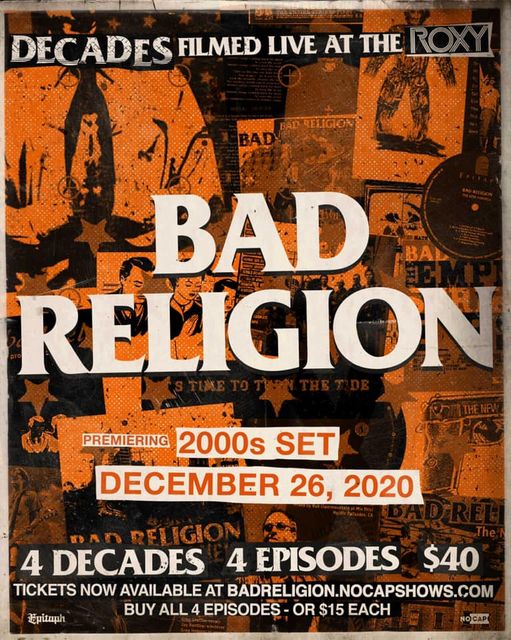 Bad Religion continued with their “Decades” concert series on Saturday December 26th live from the Roxy Theater located in West Hollywood. This was the third of four online streaming concerts to celebrate the bands forty years of making music with each performance featuring a full set from four different decades of the bands career (80’s, 90’s, 2000’s, 2010’s). Newly record live performances combined with exclusive interviews and behind the scenes access give fans an immersive experience which they can enjoy from the safety of their own homes.

For concert three in the “Decades” series Bad Religion jumped back to the decade of Y2K and Windows ME to perform material compiled from “The New America” (2000), “The Process of Belief” (2002), “The Empire Strikes First” (2004) and “New Maps of Hell” (2007). The set despite clocking in at just under 60 minutes featured the live debut of  “Let It Burn”  along with performances of  “Epiphany” and ”Beyond Electric Dreams” both of which have been absent from live shows since 2015. Also included in the evenings set were long time staples “Los Angeles is Burning”, “Supersonic” and “New Dark Ages” before closing out the night with “Bored and Extremely Dangerous” (a song not performed live since 2008) and probably the bands biggest song of this era “Sorrow” certainly did not disappoint. The performances like with the previous two shows were mixed in between behind the scenes footage and insightful interviews with the members sharing memories of different experiences from the decade. This certainly added to the overall presentation and gave the show a nice steady flow. To enhance the experience for fans even further the band was again on hand interacting with fans via a live chat which occurred throughout the entire show.

Despite clocking in at just under 60 minutes along with a few different sound inconsistencies “Decades- 2000’s” at first look/listen might not seem to be the strongest presentation we have seen thus for however the performance, like previous shows still was visually and for the most part sonically superior to other bands using this same type of model. Bad Religion week after week continue to provide enjoyable viewing/listening experiences proving that an old dog can learn new tricks as the bands quick grasp on virtual concerts is one to commended. The final performance of “Decades” is scheduled for Saturday, January 2nd and will feature songs from 2010-2019. All previous shows can be streamed here via NoCap.com. We definitely recommend you check them out!