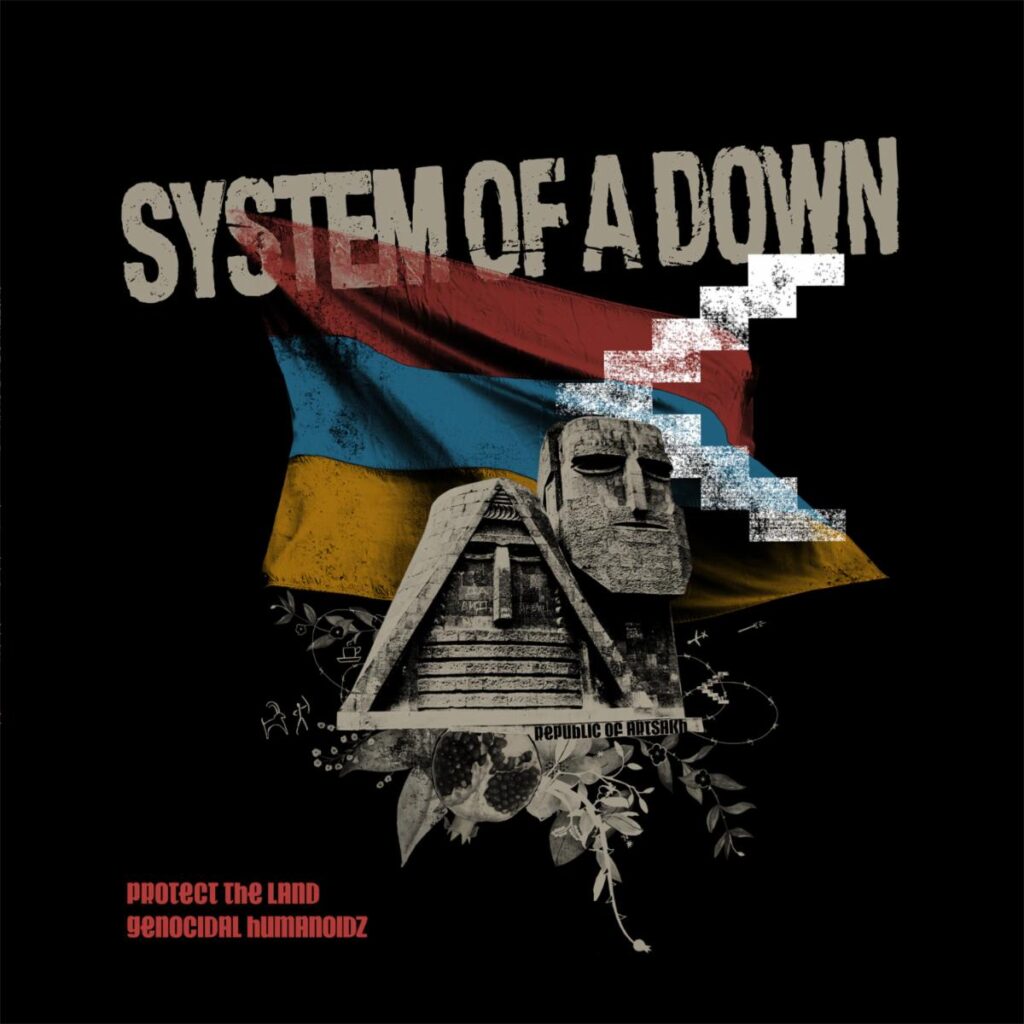 IT TOOK AN ATTACK AGAINST ARMENIANS TO BRING IT ABOUT, BUT THE WAIT IS OVER SYSTEM OF A DOWN RELEASES TWO BRAND NEW SONGS TO RAISE AWARENESS AND FUNDS TO AID THE PEOPLE OF ARTSAKH AND ARMENIA AFTER CONTINUED ATTACKS BY AZERBAIJAN AND TURKEY.

It’s been 15 years since the GRAMMY®-winning, multi-Platinum-selling SYSTEM OF A DOWN, one of the most beloved rock bands in the world, released new music.  For years, fans and press speculated about this, and of late, the rumor mill has gone into overdrive hypothesizing when the band might return to the studio.

Today, motivated by the recently-erupted conflict between Artsakh and Azerbaijan, the latter aided by Turkey and accountable for the greatest violence the region has endured in 26 years, System Of A Down – Daron Malakian/guitars, vocals, Serj Tankian/vocals, Shavo Odadjian/bass, and John Dolmayan/drums – announces the release of its first new songs in 15 years:  “Protect The Land” and “Genocidal Humanoidz.”

Produced by Malakian, who also wrote the music and lyrics, both songs are streaming now on all DSPs and are available for purchase on Bandcamp with band royalties earmarked for the Armenia Fund.  You can check out the music video for “Protect The Land” HERE.

So why now?  Last month, profoundly affected by the unwarranted surprise attacks and bombings of civilians perpetrated by Azerbaijan and Turkey (Turkey was responsible for the genocide of 1.5 million Armenians in 1915 as well as over 100 years of denial), Dolmayan texted his three bandmates.  Said Dolmayan, “I texted, ‘no matter how we feel about each other, no matter what issues linger from the past, we need to put them aside because this is bigger than System Of A Down and bigger than all of us…..we need to do something to support our people.'”  Joined together on a subsequent conference call, everyone voiced the same concern and the vital importance of helping in some way, the way they knew best – music.

“The aggression and injustice being perpetrated against the Armenian people in Artsakh and Armenia by Azerbaijan and Turkey is a human rights violation and a war crime,” said Tankian.  “All of us in System realize this is an existential battle for our people, so this is very personal for us. What we need right now is for the world to put politics aside and support Armenia by sanctioning Turkey and Azerbaijan and recognizing Artsakh.”

System Of A Down also releases the music video for “Protect The Land,” that incorporates recent footage of the protests and on-the-ground fighting in Artsakh, but in a very personal and aesthetic way.  As he did for all previous System Of A Down releases, Odadjian executive produced the music video and curated the cover and brand art for the project.  “I wanted to show the unification of our people around the world for one common cause, illustrating the power in numbers,” he said, “so we brought together people from all ages and professions who believe in and are fighting for that same cause.  It’s one thing to come up with an idea, but to see it come alive as happened with this video, has been just incredible.”

On the recording of “Protect The Land” and “Genocidal Humanoidz,” Odadjian added, “It was such a pleasure for us to be together in the studio again, very comforting and natural, like no time had passed at all.”