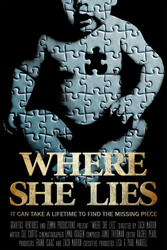 As an adult who was adopted as a baby I’m always keen when a film that tackles the subject comes around.  They are usually feel good stories that leave you smiling and happy when they end.  That being said, “Where She Lies” took me on an emotional rollercoaster I am still recovering from.

Meet Peggy Phillips.  In 1961, at the age of 19, the unmarried Peggy found herself pregnant.  The father of the child was a married man who had told Peggy he was separated from his wife.  Anticipating the family embarrassment that such a situation would bring in this time period, she is sent to live with her aunt.  Her obstetrician urges her to give the baby up for adoption, as it will always be labeled a “bastard,” while her father tells her that if she keeps the baby she will always be known as a whore.  He gives her an ultimatum – she can come home after the birth but only without the child.  The problem seems to solve itself when Peggy is informed that the child, a girl, died shortly after birth.  But did she?

A puzzle that has you scrambling to put the pieces together right up until the end, “Where She Lies” is not only one of the best documentaries I have seen this year, but one of the best films as well.  Intrigued by reading a story about Peggy and her daughter, director Marion contacts her and informs her that he would like to help her solve the mystery and film the efforts.  What mystery, you ask?  It seems that, on her deathbed, Peggy’s mother informed her that her baby didn’t die.  Instead she was adopted by a doctor and his wife who lived near the aunt she stayed with when she was pregnant.  Peggy discovers the doctor and his wife DID adopt a baby girl 6 months to the day after Peggy gave birth.  The daughter has become a habitual criminal, spending the past 30 years in and out of prison.  But is SHE the daughter of Peggy Phillips?

In putting together the pieces of this puzzle – director Marion illustrates his film and chapter breaks with scattered jigsaw puzzle pieces – the filmmaker leaves no stone unturned, interviewing everyone from the cousin who swears the baby was alive and in good shape to the widow of the man that impregnated Peggy.  Everyone has their own opinion and somehow they all make sense.  Until they don’t.

Again, as a child of adoption I pay close attention to how the children are portrayed.  I found it incredulous that the convict daughter blames her being adopted for her drug issues, saying that all adopted children crave their real mother and unconditional love.  Bullshit!  I never for one moment doubted my adopted parents’ love.  When I attempted to find my birth family – with my adopted parents’ knowledge and approval – I did so not out of a sense of something missing but more out of curiosity, especially as I was getting to an age where the doctors would constantly ask me if there was a history of “insert a disease here” in my family.  I was 45 when I found them – I just turned 60 – and thought I love them all – I found 6 brothers and 4 sisters – I don’t love my adopted parents any less.

“Where She Lies” is now available on all major Video On Demand platforms.