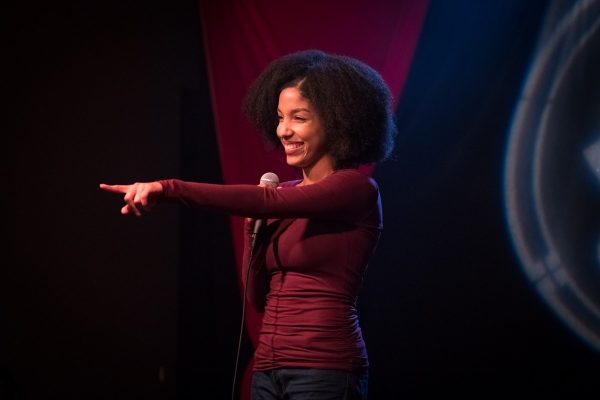 The story is told that, in 1833, a friend visited actor Edmund Kean on his deathbed and said sympathetically, “This must be very difficult for you?”. Kean smiled up at his visitor weekly and assured him it wasn’t.  “Dying is easy,” Kean replied.  “Comedy is hard.”

Not sure if that is a true story or not but it has lived on through the ages.  Jack Lemmon was fond of saying it and, in the film “My Favorite Year,” Peter O’Toole’s character also uses it.  I’ve been told I’m a funny guy but I don’t have three minutes of stand-up to offer.  I have great respect for my friend Sandy Bernstein, who many years ago, in her fifties, decided to give stand-up comedy a try and she has been quite successful at it.  It’s not for everyone.  But Charlene “Charlie” Lewis Harewood) is a 21 year old wannabe who’s not afraid to take the stage.  Unfortunately, she should be.

A well-crafted story grounded by excellent performances, “All Joking Aside” is one of those little films you might miss if you blink. Charlie’s first attempt on stage is ruined by a heckler who dresses her down from the audience for her topic selection.  Charlie later learns that her tormentor is Bobby Carpenter (an excellent Markinson).  A decade earlier he was THE comic that everyone wanted to see, with new material nightly and a disdain for doing television and movies.  Charlie finds out that in his last appearance on stage Bobby got into it with a customer and assaulted him with the microphone, blinding the customer.  Charlie tracks Bobby down and convinces him to teach her the ropes of comedy.  From how to design your set list to which jokes to lead with first.  And, most importantly, to observe and write daily.

A film about stand-up should, of course, be funny and “All Joking Aside” has some side splitting moments.  But it also has heart, which makes it a rarity in the genre’. The heart here comes from the performances of the three leads.  As Charlie, Miss Harewood begins as a girl with a dream (and a medical condition) who is not afraid to face down either.  Mr. Markinson, a veteran of several television shows with recurring roles in “Mad Men” and “The L Word” among others, is well-cast here.  At first you’re not sure of his motives for initially heckling Charlie, then agreeing to help her but as the film plays out, they become evident.  And I must also single out Mr. Hewitt, who plays the owner of the local comedy club and whose relationship (and influence) with Bobby helps drive the film.

As I said, the film is well written and nicely paced.  If I had one problem with the film it’s that it makes it look very easy to just walk into a comedy club and get on stage.  Not in New York City!  If you don’t believe me, ask my friend Sandy!