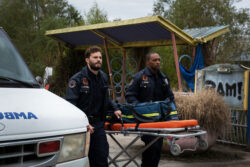 Unfortunately I’ve known too many people who’ve taken hallucinogens and claim that it has altered their perceptions and opened their minds to the world. Having never done hard drugs like DMT, I can’t speak to whether or not they did view some other worldly, but I feel like those who’ve known people who’ve taken drugs like peyote or acid can attest to the fact that habitual use or people who’ve tried multiple times will talk your ear off about how it’s revealed the world around them. There’s even a scientific community that believes hallucinogens had a hand in helping early man evolve into homosapiens. Regardless, what if that other worldly visit was real?

Steve (Mackie) and Dennis (Dornan) are New Orleans paramedics, who’ve dealt with a lot of bizarre overdoses. First off, the drug is unrecognizable and the packaging simply states ‘Synchronic.’ Secondly, some of these overdose crime scenes are unusual. One crime scene in particular left behind a message sprawled on the wall which stated, ‘Time is a lie.’ Dennis, a happily married father, doesn’t stray too much into what’s going on, but Steve wants to pry. That prying is because Steve has a terminal diagnosis, no family, and a lot of one-night stands who offer no comfort.

I won’t reveal too much about the crux of the film, the drug, because I feel like it’s a decent reveal, even though the film really spoon feeds the details so you should be able to realize what’s going on fairly early. While this would sink most films, “Synchronic” thrives because of it’s personal stories, the atmosphere it crafts and being a unique, fun genre blend. It finds a way to be an emotional buddy film, a sprawling sci-fi, and at times, a tense thriller. While I haven’t seen the previous films made by directors Benson and Moorhead, I might have to with how well crafted “Synchronic” is.

“Synchronic” doesn’t reinvent any sci-fi wheel, but it keeps you engaged and manages to pull off a few tricks along the way. Another key ingredient to the film’s entertainment is cleverly explaining everything, without explaining to the point where they create their own plothole. The intricacies of the sci-fi and humans on screen are taken care of so-well, you’re bound to forget and ignore most of the film’s flaws.