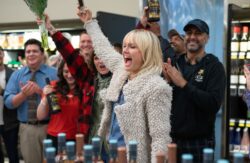 Holiday ensemble comedies conjure up bad memories, like “New Year’s Eve” or “Mother’s Day”. However, slapping together a holiday film for the latest, and possibly greatest, holiday feels like a step in the right direction. If you haven’t heard of Friendsgiving or participated in Friendsgiving, you may be missing out on the best holiday invention of the 21st century. As for the movie, “Friendsgiving,” it’s tougher to fully recommend.

Abby (Dennings) isn’t seeing her family for regular Thanksgiving and appears to be going all-out for an upcoming Friendsgiving, with her best friend Molly (Akerman). Abby needs an excuse to unwind and relax a bit because she’s going through a one-two punch of emotional turmoil. She recently came out of the closet and is now dealing with her first post-out of the closet break-up. That effort is undermined by Molly’s newest boy toy, a myriad of random friends that show up for the event, and a lot of unspoken conflicts. Just like a Friendsgiving turkey, this movie becomes stuffed, but not in a good way.

The list of characters that arrive are too numerous to keep track of, especially when half of them don’t really add much to the overall plot or narrative. It seems like some are brought in for some simple one off jokes or to bring a new drug for our two main characters to partake in. I wouldn’t say this movie is bad though, it’s just not a memorable comedy. Some of the jokes fall about as flat as the flaccid penises they’re making fun of, and some of the humor is about as clever as the ones I told in middle school. But there’s something genuinely entertaining about a cast that really dedicates 100% of its talent to the script.

Honestly, if this was a low budget film with a bunch of no-names, I’d be more inclined to not recommend this film at all. But there is something delightfully juvenile about everyone really putting forth their best efforts. It does come into play when the movie needs to get emotional, as all of these holiday themed films end up doing. The earnest attempt at humor really kicks in when a trio of Fairy Gay Mothers arrive to talk with Abby towards the latter part of the film. I only mention that simply because it was one of my favorite parts.

“Friendsgiving” is a movie I can’t really recommend or tell people to stay away from. I can genuinely say that opinion isn’t a cop out. This kind of film is in the same vein as “Bachelorette” or “Rough Night,” where the comedy isn’t memorable, the story isn’t clever, but damn it if the cast and crew did such an admirable job, I found myself smiling and forgetting about the pandemic world around me. In some ways, that’s what a good real-world Friendsgiving is, forgetting about ones problems and just enjoying some good company, food and fun. “Friendsgiving” didn’t offer any food, but two out of three ain’t bad. Since I can’t make a recommendation, watch at your own risk and you may find “Friendsgiving” rewarding.