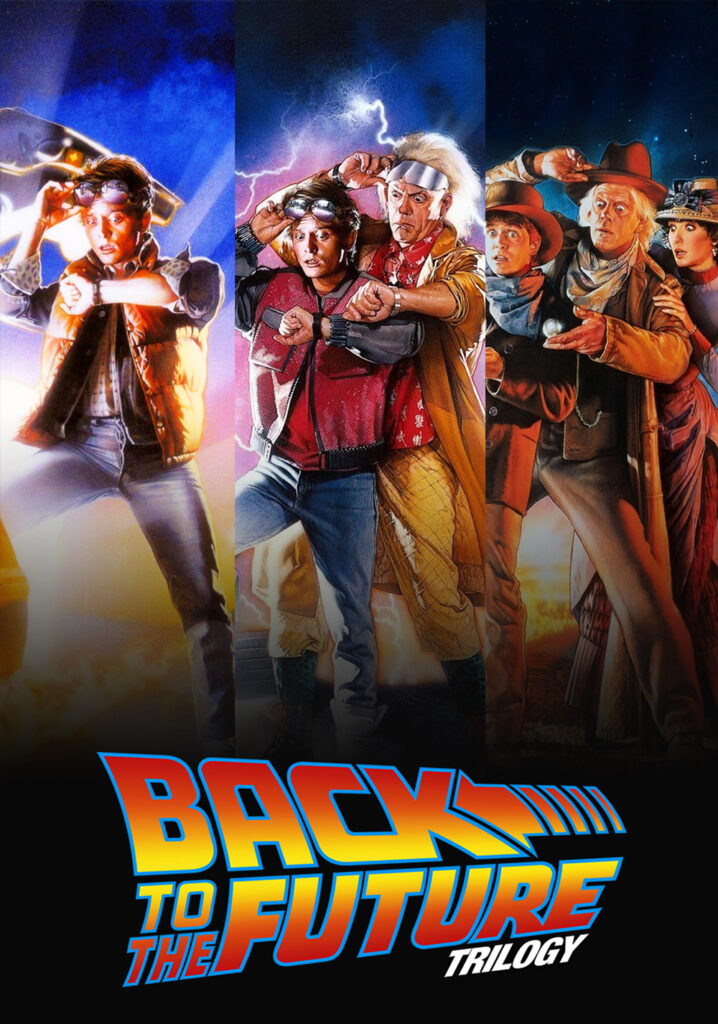 In the summer of 1985 a film made it’s way to theatres rather unexpectedly. I was a theatre manager when “Back to the Future” opened up and the two things I remember best about the film was that it was released earlier than planned (I have buttons announcing the film opening on July 19th. However, with nothing to show in theatres during the coveted Fourth of July period, Universal dropped it on July 3rd) and that, when the film was over, the credit card read THE END. Not exactly. “Back to the Future” would go on to spawn two sequels and a legion of fans and I couldn’t think of a better day than today, October 21 – the day Marty goes back in time – to rave about the new Blu-ray release of “Back to the Future: The Ultimate Trilogy!”

The story in a nutshell: Marty McFly is a “slacker” who loves playing guitar and riding his skateboard. His friendship with Doc Brown ends up sending him back in time to 1955, where he meets the young boy and girl who will become his parents. Hijinks ensue. In BTTF II Marty and Doc actually go into the future – JAWS 19 anyone – and back. Part III takes them to the old West. But no matter what century they’re in, the story is top notch and the two characters beloved.

But Mike, you’re saying, I already have these films on Blu-ray. Why should I get the Ultimate Trilogy? Besides the amazing video and audio, there are a lot of bonus goodies carried over from the 30th Anniversary Edition but you can now watch these new amazing extras:

A three-part feature that takes you behind the scenes on “Back to the Future: The Musical,” with a couple of music videos from the show.

Audition tapes of other actors considered for the film, including C. Thomas Howell and Ben Stiller reading for Marty McFly, Kyra Sedgwick autidioning for Jennifer Parker and Billy Zane and Peter DeLuise auditioning for Biff (Zane would make the film as a member of Biff’s gang).

All this and great extras on all three films, including Deleted Scenes, Outtakes, Commentaries and much more. Sadly, no Eric Stoltz footage, though when I interviewed Bob Gale (one of the writers/producers) he told me they haven’t released the footage because they felt it would reflect badly on Stoltz. There are plenty of photos of Stoltz on the set but the only footage I’ve ever seen is a quick shot of him walking across the street. However, if you’re sharp eyed, you’ll see that it is Stoltz’s hand that punches Biff in the soda shop. Look even closer and you’ll see it’s clearly the side of Stoltz’s head. I wonder if he gets residuals.