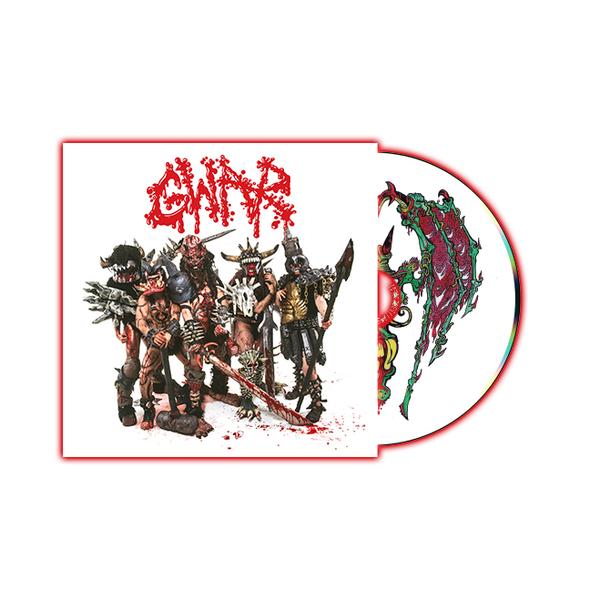 “Scumdogs of the Universe” (30th Anniversary Edition – Remixed and Re-mastered)

The year is 2020, the day October 30th. An entire planet grasping for air, Impending doom hangs overhead like a thick fog, blinding all to the approaching hell. Mother Earth in chains, she pleads to her captor, “Spare the human race.” Emerging from a dank green cloud of alien gases, gripping his cuttlefish genitals, Oderus Urungus circa 1990 appears. Cocaine dust smeared beneath his nostrils, crust around his lips, Oderus stands before our earthly mother. He lifts his mighty sword to deliver one final blow. There is now no one standing between us and our alien masters. Our lords GWAR return to unleash their magnum opus upon us once again. Reborn, remixed, and re-mastered, “Scumdogs of the Universe” is back for the 30th Anniversary of human annihilation. Rest assured, doomsday sounds better this time around.

“So don’t you know? I’m so sick of you.” Croons front man Oderus Urungus  flanked by a legion of Scumdog brethren including Beefcake the Mighty, Flattus Maximus, Balsac the Jaws of Death, Jizmak Da Gusha,, one or two intergalactic hanger-ons and managed by the only human on earth coked out enough to tame these unwieldy beasts, the man with the “Worlds Tightest Pants”  Sleazy P. Martini. “Scumdogs of the Universe” is easily the bands least disliked album. Riddled with classics like “Sick of You”, Vlad the Impaler” and “Cool Place to Park” which along with the rest of the album received a special 30th anniversary Remix and Re-master courtesy of Ronan Chris Murphy.

Though GWAR may prefer to stick other things in their orifices, the music creeping its way into your pores is infectious and here to stay like a nasty case of Neptunian gonorrhea. Long time fans that by now should be well versed in these songs are given a fresh update that will help them relive the experience of hearing these tunes for the first time. This re-master is definitely one you need in your collection and butts up nicely against an original  Master pressing.

10.) The Years Without Light