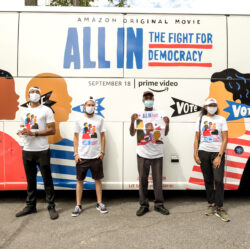 There’s a history professor at the university I attended who gave a seminar to students about why they should vote. There was something interesting he mentioned where he said a lot of Americans take voting for granted because they were simply born here and didn’t have to fight for their voice to be heard. I know how the layman viewer would read that, but I know what the professor really meant. Democracy is something that you have to fight for constantly. Voting is something you need to do constantly. Not because voting is your duty, but because the right to vote is constantly under attack. “All In: The Fight for Democracy” is not only about that topic, but it’s also the most important documentary to watch before November 3.

The documentary crams a lot of topics into its brief time, but does it in a very abstract way, by condensing a wealth of information into short, concise moments or highlighting a specific event that speaks for a countrywide problem. It touches upon the civil rights movement, the Civil Rights Act of 1965, voter ID laws, voting rights for felons, gerrymandering and so many other topics. I really don’t want to bore you with all the others are dive into each topic because this is the kind of documentary you flip on and let yourself become awash with emotions, whether it’s sadness, angry or hope. The reason all these topics are discussed is because the documentary is building to this moment, this thesis statement that America is at risk of repeating a very dark moment in history.

Three weeks ago, I posted my review of a Donald Trump documentary, making the argument that it was a documentary that’ll inevitably be forgotten because of its timely, yet inevitably outdated material. It’s almost as if 2020 decided to give me something better to talk about in return. “All In: The Fight for Democracy,” is not only the most relevant documentary this year, but may be discussed and watched for years, if not generations, to come. With that said, watch this documentary immediately, stay informed, keep an eye on your representatives and elected leaders (local, state and federal) and vote this November. And just like that professor imparted to students, you must not only vote this year, but in every election from here on out.