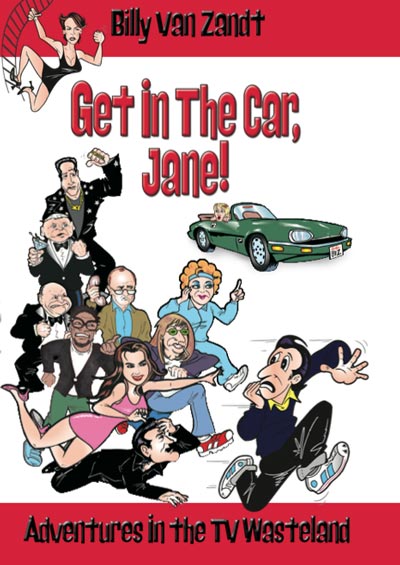 GET IN THE CAR, JANE!

I first flew to Los Angeles in 2015. After I landed I picked up my rental car and headed to a restaurant to meet Billy Van Zandt.

38-years earlier, Billy Van Zandt did the same thing. Only instead of heading to lunch, he headed to Lucille Ball’s house. Ms. Ball wasn’t home. Billy was informed of this news by a butler who proceeded to slam the door in his face. But fate soon lent a hand and, before he knew it, he and his then-girlfriend Jane Wilmore would soon embark on an amazing four decade journey through Hollywood.

Brilliantly written, “Get in the Car, Jane!” is a hilarious look at what goes on behind the scenes in the wonderful world of television. From wide-eyed kids who wrote their own theatrical shows and aspired to be actors to show runners of their own shows, Billy and Jane’s adventures will keep you in stitches as they work their way up the ropes, rubbing elbows with many of the greatest performers in history, including  Lucille Ball, Brooke Shields, Frank Sinatra, Don Rickles, Martin Lawrence, Andrew Dice Clay, Richard Lewis, Bob Newhart, Jamie Lee Curtis, The Wayans Bros., Richard Mulligan, Alan Arkin, DL Hughley, Dorothy Lamour, Elaine Stritch, Olympia Dukakis and Penny Marshall,

Billy and Jane’s writing samples earn them a spot on the writing staff of “Newhart” and soon they begin working on and writing shows for many of the popular television series of the 1990s, including “Anything But Love,” “Martin,” “The Wayans Bros,” “Suddenly, Susan,” “Yes Dear” and “The Hughleys.” All of these tales are terrific. The pages dealing with the birth, and death, of the Don Rickles/Richard Lewis series “Daddy Dearest” is worth the price of the book alone.

Sadly Jane Wilmore passed away earlier this year but Billy Van Zandt is still writing and still knocking them dead in the aisles. Today’s times require a healthy dose of laughter to help get us by and “Get in the Car, Jane!” is the perfect prescription!