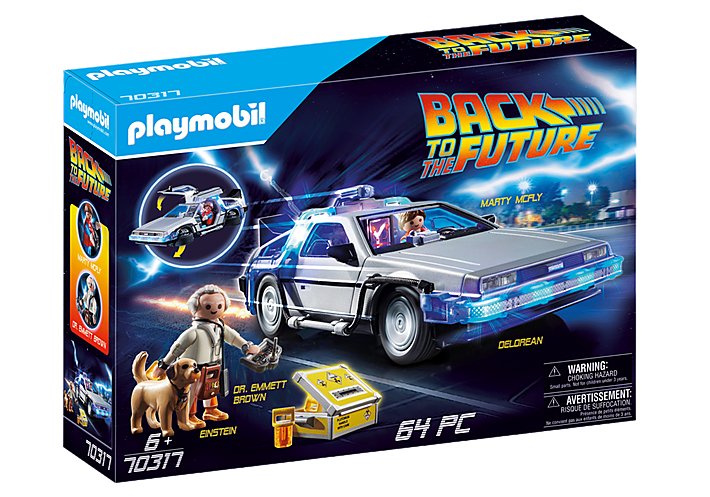 “Back to the Future”

Playmobil goes back to the future! With the iconic DeLorean vehicle and Marty Mcfly/Dr. Emmett Brown figure two packs. Following in the footsteps of the companies “Ghostbusters” and “Scooby Doo” lines “Back to the Future” is the most recent property to get Playmobil’s signature toy treatment. Both kids and nostalgic parents will enjoy reliving their favorite moments from the films time and time again with these recently released toys.

After a brief construction period our in house toy tester was on his way with his brightly lit DeLorean and highly detailed figures time traveling to different areas of the house taking breaks just long enough to refuel his vehicle with the included plutonium and then he was off again before you could say “Great Scott!” The DeLorean vehicle features gull-wing doors, folding wheels for hover mode, an illuminated flux capacitor inside and a blue illuminated exterior. Included with the vehicle is Marty Mcfly and Doc Brown in their outfits from 1985 along with a plutonium case, skateboard, remote control and Einstein, Doc Browns lovable companion. Also available is a two figure set which again features Marty and Doc Brown however this time outfitted in their 1950’s clothing complete with a guitar for Marty. With the DeLorean already including both Marty and Doc it would have been nice to see some of the other characters from the film available before these two but that didn’t halt our testers imagination any as he switched between the various versions of the characters and their included accessories.

As with all Playmobil products the detail on each piece and figures in the “Back to the Future” line is top notch. Even the included cuffs for Marty’s 1980’s attire feature the same print seen in the movie. Very cool! The DeLorean set is priced at $49.99 and for what all is included we thought that was a pretty fair price. You will need to purchase AAA batteries for the lights as sadly those are not included. The two figure set has a price tag of $7.99 which might deter some purchasers as only two accessories are included and the figures are again based off of Marty and Doc. Collectors will definitely want to get both and if you truly want to recreate the scenes from the films then you NEED multiple Marty’s and Doc Browns. With the latest “Back to the Future” release from Playmobil you “don’t need roads”; all you need is your imagination to bring these really fun toys to life.