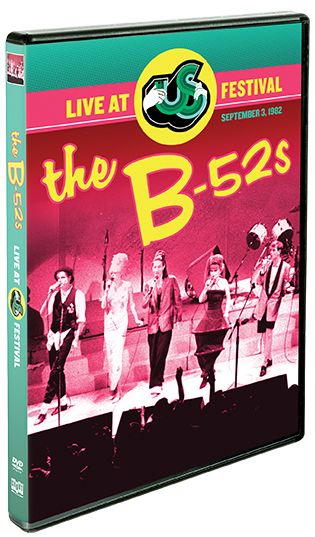 Travel back in time to a carefree Labor Day weekend in 1982, when The B-52s: Live At The US Festival comes to DVD and digital platforms on September 4th, from Shout! Factory. The performance features all five founding band members, and the film is dedicated to Ricky Wilson, who passed away 5 years after the US Festival performance. In brand-new interviews included in The B-52s: Live At The US Festival, band members Fred Schneider, Kate Pierson, and Cindy Wilson talk about Ricky, and what he meant to their unique sound, along with memories of performing at the US Festival.

Dance this mess around with the all-time, good-time party band The B-52s in a wild and unforgettable live performance. This hour-long set, recorded at the inaugural US Festival in 1982, had the crowd dancing from start to finish, and was considered to be one of the best of the entire festival.

“It was hot as hell in the desert but as soon as we got going we had the audience dancing up a dust storm,” says Fred Schneider.

This rare footage shows off the joyous energy and unique spirit that has been a hallmark of their music and live performances for over 40 years.
Packed with 13 hits and favorites from the group’s early years, including “Rock Lobster,” “Planet Claire,” Private Idaho,” and others, Live At US Festival is the first-ever live concert DVD release from The B-52s’ classic era, and a tasty slice of rock history that’s an absolute must-see for anyone who likes to party out of bounds!

The B-52s: Live At The US Festival is available for pre-order now at Shoutfactory.com and amazon.com.

The B-52s: Live At The US Festival Performances:

Party Out Of Bounds

Give Me Back My Man

Throw That Beat In The Garbage Can

About The B-52s: Selling over 20 million albums worldwide, The B-52s—Fred Schneider [vocals], Kate Pierson [vocals], Cindy Wilson [vocals], — have quietly impacted alternative music, fashion, and culture over the course of four-plus decades. They count John Lennon, Madonna, James Murphy, and Michael Stipe among their disciples. Panic! At The Disco, Blood Orange, The Offspring, Pitbull, Roger Sanchez, and DJ Shadow have sampled classics from the band’s discography as Seth MacFarlane’s FamilyGuy, The Simpsons, Sugarland, and more offered up covers of their own. They inched towards the forefront of the post-punk movement in America codified by 1979’s self-titled The B-52s. Not only did the record go gold, but it also placed at #152 on Rolling Stone’s “500 Greatest Albums of All Time” and #99 on VH1’s “Greatest Albums of All Time.” The gold-selling Wild Planet arrived hot on its heels in 1980. With Keith Strickland brilliantly filling the void in with music composition and live show guitar duties, 1989’s watershed Cosmic Thing elevated the B-52s to another galaxy altogether. It moved 5 million-plus units and spawned a string of Top 10 smashes in the form of the GRAMMY®-nominated “Roam” and “Love Shack”—which Rolling Stone lauded on the “500 Greatest Songs of All Time.”