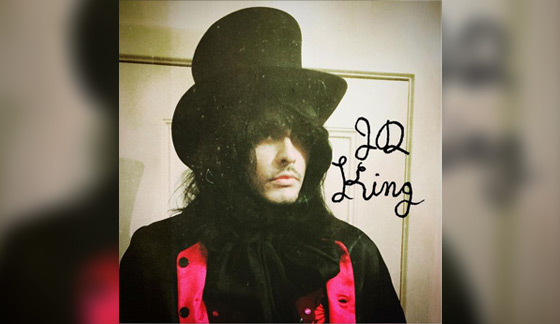 Musician, Songwriter, Producer and Artist J.D. King has just released a new album titled “Moon Gardens”. Painstakingly recorded over three years on reel to reel analog equipment the album showcases Kings multitude of talents while being backed by an impressive stable of musicians all acting as intricate pieces within this audiophiles dream. Media Mikes had the chance to speak with King recently about the creation of the album, his decision to use only analog equipment and his plans for performing this material live.

Adam Lawton: Can you give us some background on the work that went into “Moon Gardens”?

J.D. King: After I had come off of the Olms project I was doing with Pete Yorne I started really getting in to the use of analog equipment. I wanted to make a 60’s style record the way they did back then. I was studying how album like the Beatles “Revolver” was made and albums like that. We did all the recording via analog and mixed it on tape as I wanted everything to sound just as it would as if it were recorded in the 60’s. I was meditating around eight hours a day and during that time I came up with all these song concepts. I had a good amount of vintage gear to start but then I acquired some more and found a few engineers who could mix on tape in the style that I was going for. We mixed everything live so that was another challenge we were working with as someone basically had to be turning knobs as we were performing. On the song “The Wooden Man” there is a panning part where the engineer was working the panning effect while I was turning some other knobs. With this record I wanted everything to come from the best place it possibly could. Every ingredient had to be the very top. From the musicians, the gear and the performances themselves I wanted the best.

AL: What was it about the 60’s era of recording that captured your interest?

JDK: I am a huge record fan. Even before all this quarantine stuff I would sit with a stack of records and just listen to music all day. I would even listen to some stuff on reel to reel. I never got a good feeling from digitally recorded music. It is less biological to me. I enjoy hearing over tones in music which is something generally missing from digitally recorded music. Honestly I think engineering from those eras was so much better and the standards were much higher.

AL: Working with older equipment did you run into any issues?

JDK: Sometimes we would have gear go down and it wouldn’t just be a simple fix like going to the store and getting a new one. Some of the gear we were using was from as far back as the 1930’s. When a pre-amp or something would go down during the middle of a session we would have to stop and take the time to find someone who was skilled in working on that type of equipment. This did cause some challenges from time to time.

AL: You worked on this album for three years. Did the writing process take up a majority of that time or was it more from the high level of production you were going for?

JDK: I would generally get my group of session’s guys together once a month to jam and record. The rest of the time I was learning and experimenting with the engineering process as well as writing. I was working basically non-stop. I was wearing a lot of different hats and just had to figure all that stuff out. I think for the most part the time between the two was pretty equal. There were a lot of new things with this record both musically and technically. I wanted to expand and try some new things.

AL: At what point in time did you decide that the record was completed?

JDK: I think right around when I had twelve or thirteen songs. I felt things were rounded out and was happy with what I had. I think when people listen this in an album format it is going to really click. I am an album rock fan and I think that’s was I was able to do with this.

AL: Being that you play quite a few instruments how did you decide which ones you would play and on which tracks?

JDK: I would put the bones of each track down first. From there we would start rehearsing it and bringing the track to life. While doing that I would hear these things that I wanted to add as did the guys I was playing with. Stuff tends to happen in the studio while you are working.

AL: Did you find your creative process changed at all over the course of this record?

JDK: Things stayed pretty much the same for me as they always have been. If you listen to my first record I had a pretty big hand in the production of that record even though it was my first one. Every band I was playing in I always had this ear towards production. Pete (Yorn) is the same way. I learned a lot from him. We tried to work very fast over the course of this record. I have to give to those guys in the sixties as they had to bring their A games. You didn’t want to miss a take as you were recording directly to tape which was expensive. We had a couple tape issues which caused us to have to scrap a couple really good takes. I learned my lesson from that.

AL: With the current pandemic changing a lot of the way things are being done what are your plans to help get this music out to the public given the traditional in-person/live element of music is indefinitely on hold?

JDK: I am kind of lucky in that I learned so much about performing in a studio during this record. It was something you had to do. Having a background in photography I know about lighting and all those things as well so production comes simple for me. Being essentially a one man production crew I can throw up a few cameras and lights and I am set to go. I did a lot of painting over the winter so I can throw those up in the background as well and showcase a lot of my different talents. You can see a lot of what I have going on through my Instagram @mrjdking