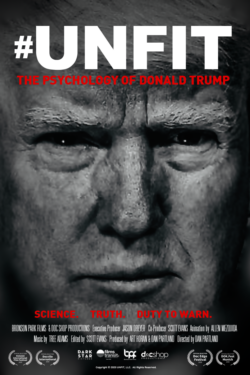 This might be the first review ever where I know that I’m not going to persuade a single individual to watch this documentary or not. Political documentaries are divisive enough, but in today’s political climate of red or blue tribalism, it’s fairly easy to say that people will see it or they won’t. Add in the fact that it’s solely about President Donald Trump, you either will or won’t watch it. You either will or won’t believe the things in it. There is no gray area. You, the reader, know where you stand. So you’re either going to read this and enjoy me discussing the film, or you’re going to get mad, not read it, or read and send me an angry email.

Having worked in news since 2013, there aren’t a lot of current event documentaries that can catch me by surprise. “Unfit” is no different. “Unfit” covers a lot of ground in it’s brief timespan, starting with the inauguration of the 45th U.S. President and ending on a message of “Go and Vote.” In that timespan, the film goes over some of the more outlandish things the President has said or done, from having a rally crowd swear an oath of allegiance to calling the COVID-19 pandemic a liberal hoax.

The movie backpedals every once so we get information about his life before the White House. We learn about his upbringing, his real estate dealings, his rise to star power, and his knack for cheating in golf. There’s almost too much to cover, for one singular film under two hours, but it does something interesting throughout. The film talks with various psychologists about why President Trump should be considered a malignant narcissist, the worst of narcissists. The movie also dips back into the politicization of psychology as well as several incidents that have led towards the media or politicians from disregarding statements made by experts in the field of psychology.

If you haven’t guessed or figured out by now, “Unfit” is an argument for why you shouldn’t vote for Trump this November. So going back to what I said originally, you should already know how you’re voting. For the first time in ages, it seems like America knows what it’s voting on, at least that’s what several public polls say. So how does “Unfit” hold up as a documentary? Fairly well. The design and narrative of the film isn’t groundbreaking, but it’s structured to keep moving at a brisk pace. There are also several interviews and people who interject in the hopes of persuading some hardcore Trump haters. These interviews state something simple that’s usually lost in conversation. People who voted for Trump aren’t awful people like the President. They voted because they felt like their voice was no longer being heard, which is true for a lot of disenfranchised voters. Unfortunately, as the documentary shows, it also brings out the worst in people, but this isn’t by any means a sign of the majority or even the average Trump voter.

If I had to explain why my rating was average, I think it’s partially because (like I said earlier) there wasn’t a lot I didn’t already know. I think some people will be shocked about some of the things they hadn’t heard before because of the endless news cycle that seemingly finds some new thing to report on Trump’s past, present and future. c The message is in this moment. By the time November rolls around, that message will be done and over with. I can only think of one way this movie has a place in history, and I hope that one way never comes to fruition. Just in case, I won’t even utter it. As for those who reached the end of this review, go ahead and write me your angry emails or watch this movie. Also, don’t forget to vote.